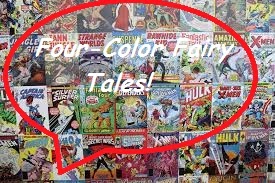 Well, this is a first.  It seems that I’m contradicting the title of my own column here with the first installment.  You see, I call this “Four Color Fairy Tales” because I want to use it to talk about fairy tales in comic books.  “Four Color” refers to an old comic book coloring process that they used to use.  However, the first comic I’m choosing to talk about is a manga which is, of course, in black and white.  However, I wanted to write about something a bit more current and I don’t usually do much with Arabian Nights, so . . . I present to you: Magi: The Labyrinth of Magic writer/artist Shinobu Ohtaka. 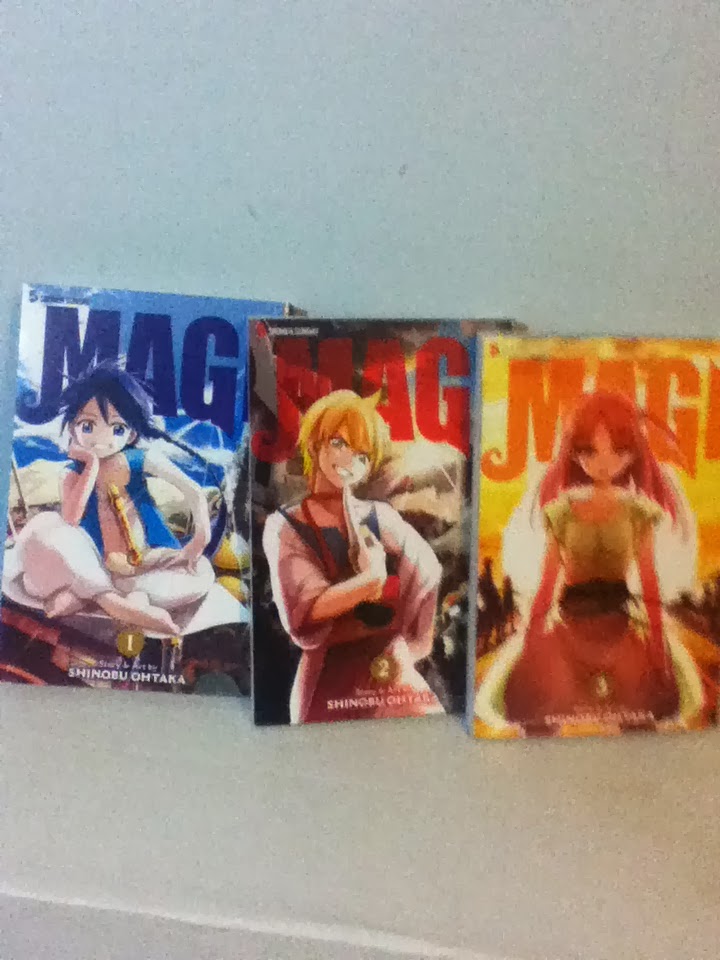 There weren’t a lot of decent pictures to work with so I took the pictures myself with an Ipod camera.  Can you tell? (sigh).  In consolation, I can link you to the official trailer for the anime adaptation (gee, sure makes it look epic, doesn't it?).


Anyway, Magi is a boys’ or “shonen” action adventure manga set in a world that seems very much like that of the Arabian Nights.  The first character we meet is this boy here: Aladdin. 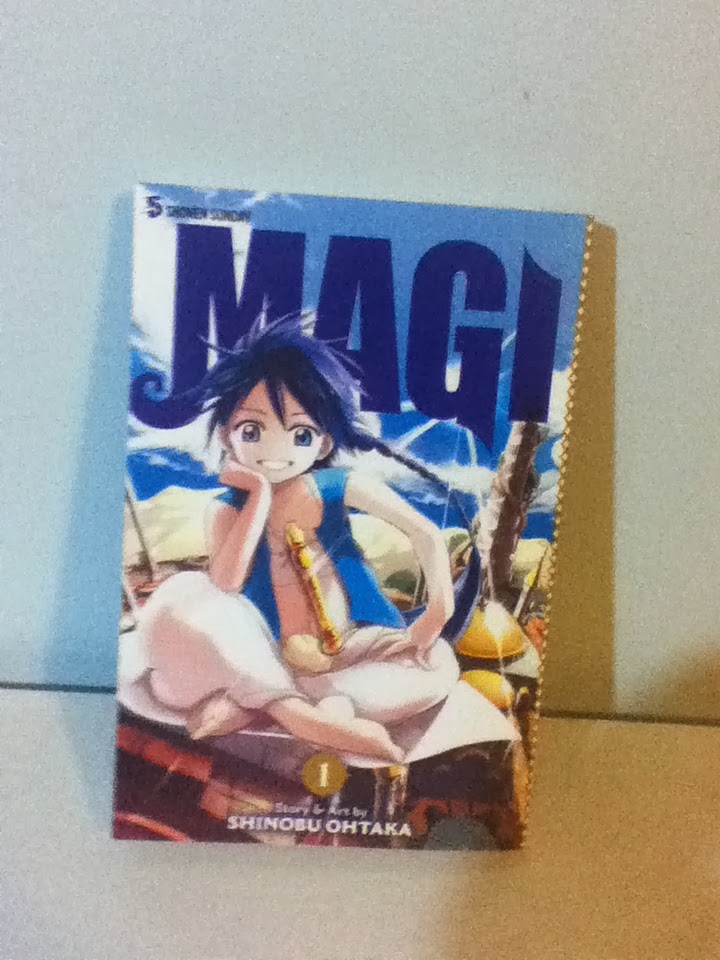 When he first appears on the scene, we know little about him other than the fact that he can’t remember his past from before he woke up in a “sturdy, underground room".  We also know that he has a turban that unrolls into a “magic cloth” (like a flying carpet) and that he’s got a magic flute that contains a djinn (yes, I know djinn is plural and djinni is the singular form, but that’s how the manga does it) named Ugo.  The flute is what they refer to as the “djinn’s metal vessel”.  Ugo himself, though, is kind of stuck in his and when he manifests, it’s usually as a giant, muscular man with the flute for his head.  Anyway, Aladdin travels around for a little while and deals with a plot involving some bandits and then on his next adventure he meets up with this young man: 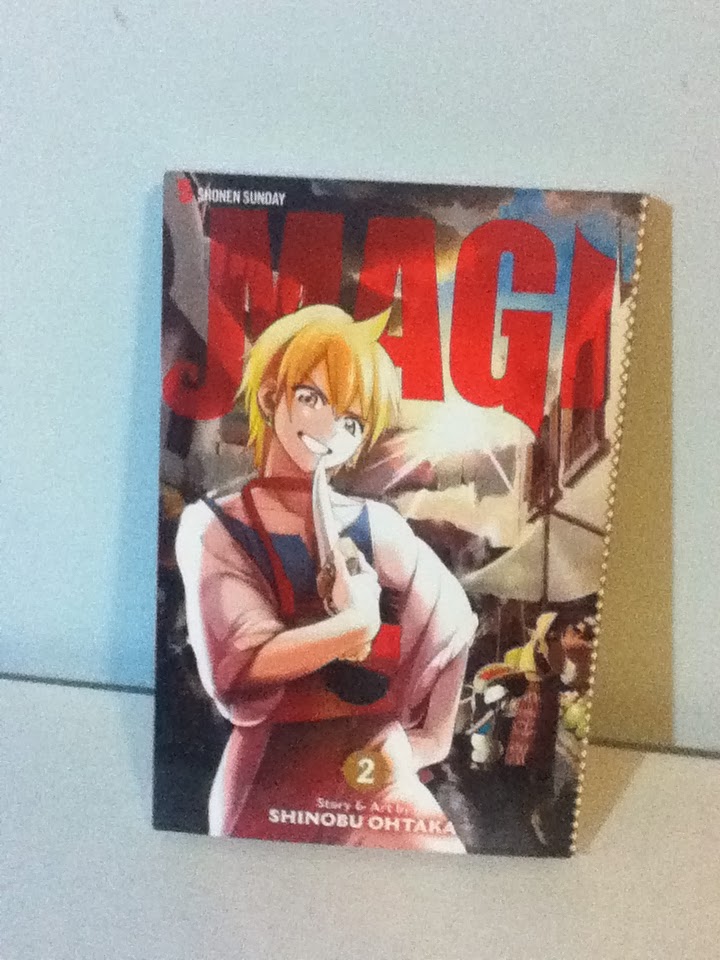 A young wagon driver named Alibaba.  It turns out that Alibaba’s goal and dream is to defeat the world’s dungeons.  Dungeons are mysterious buildings that began popping up fourteen years ago, they’re supposedly stuffed with treasures and mysterious magical objects, the most noteworthy magical objects being the djinns’ metal vessels.  The problem is that very few people who go into the dungeons come out again.  After becoming friends, Aladdin and Alibaba agree to take on a dungeon together because Alibaba wants the treasure and Aladdin wants to find the djinns’ metal vessels.


I’m not going to go any further because I don’t want to spoil anything else, but you can see where this is going.  I will say that neither Aladdin or Alibaba are quite what they seem, though.  Looking at Magi, the connection between the manga and the Arabian Nights tales is a rather light one.  The names Aladdin and Alibaba may seem familiar, however they’re both brand new characters.  This isn’t really an unfamiliar thing in relation to the Arabian Nights and pop culture (has anyone else ever noticed how many Sinbad movies and shows there are out there that have very little to do with the original stories about Sindbad the Sailor?).  There are some smaller connections.  The theme of the poor and oppressed overcoming the rich and powerful is common in both Magi and the Arabian Nights.  In Magi, this is especially the case in a story concerning a rich lord and the slaves he owns.  Also, the dungeons do have a superficial resemblance to the cave where Aladdin finds the ring and lamp in “Aladdin and the Wonderful Lamp” and the thieves’ cave from “Ali Baba and the Forty Thieves”.  Beyond that, the story is pure shonen battle manga in structure and execution.  There’s a cheerful boy protagonist with a goal and a special power and he must achieve that goal by overcoming a number of adversaries.  I’d say that if you like shonen manga, then Magi is a solid choice.  Though, maybe not something that would knock your socks off.


If anyone has any suggestions for other fairy tale comics they’d like to see in “Four Color Fairy Tales”, let me know in the comments below.
Posted by Adam Hoffman at 1:01 PM