The "Once Upon a Time" Problem.

Last night, ABC’s Once Upon a Time returned to television for the second half of its third season.  This season seems to promise some Wizard of Oz characters as well as a mystery as to what happened during a missing year.  Now, my attitude to this show has changed as time has gone on.  While it started as a show that I was very excited about, as the seasons went on I found it turning into a show that I was a bit cold on to a show that I mainly continue watching just because it was one of only two fairy tale shows on TV.  Now, I thought I might use this post to figure out what it is that bothers me about this show.


For the uninitiated, the idea is that the Evil Queen from the story of “Snow White” cast a terrible curse that stranded a number of fairy tale characters in “our world” with new names and new identities in a town called Storybrook.  The only one who could save them from the curse is Emma Swan, the daughter of Snow White and Prince Charming who was left in our world as a baby.  Also, she’s helped by her son Henry who she gave up as a baby and who was adopted by the Evil Queen and  . . . Y’know, the show’s kind of a prime time soap opera, so it gets a bit complicated. 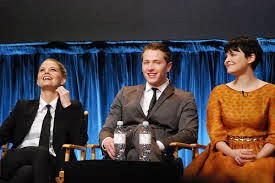 
Anyway, what is it that made become disenchanted (pun intended) with this show?


Well, one thing could be how much they lean on the familiar “Mouse-Ears” versions of these characters.  The show airs on ABC, which is a Disney-owned network.  So, they can use all sorts of Disney names and trademarks.  They use the same names for the Seven Dwarfs as Disney did.  They used Jiminy Cricket, even though the talking cricket in Carlo Collodi’s original Pinocchio gets squished by Pinocchio in a fit of anger.  They even managed to work in Pongo from 101 Dalmatians and Chip the teacup from Beauty and the Beast in their own way.  The bit that really got me was when the spinoff Once Upon a Time in Wonderland (which I actually like a little bit more than the original Once Upon a Time for some reason) used Silvermist the fairy.  Silvermist is from the Disney Fairies line of books and toys which spun-off from the Tinker Bell character from Peter Pan.  So, it’s not even the Disney version of a character or a character from a proper Disney fairy tale adaptation, but one from a tangential property. 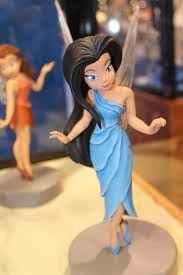 [Silversmist maquette.  Courtesy of www.flickr.com]
But, it’s hard to hold that as the reason why.  It seems like kind of a little thing.  After all, I don’t hate the Mouse.  How can I hate the people who gave the world Darkwing Duck, Fillmore and ?  Also, they bought up Marvel, Lucas Film and the Muppets, so I know they do have good taste.  I really have more of an issue with people who seem to hold their animated adaptations as some kind of canon (also, I just like to make fun of them).  So, I don’t think that’s it.


It could be some of the choices they make with these characters.  The writers of this show like to combine certain characters and they also like to make traditionally good characters bad and bad characters, well, if not good than at least complex.  The ones that really get me is how they turned both Jack and Peter Pan, my two mainstream favorites since childhood, into bad guys.  Well, actually a bad girl and bad guy respectively.  I’ve also never been the type to root for the villain, so the deepening of characters like the Evil Queen and Rumpelstiltskin don’t do much for me.  I particularly find it hard to sympathize with .  They make this big deal about how she only wants what’s right for her son, Henry.  However, she also had the chance to be a mother ages ago when she married Snow White’s father.  Instead, she treated the girl like dirt because of a broken promise that Snow was tricked into breaking.  And she still seems to carry that grudge.  However, there are some choices I did like.  I liked how they gave Prince Charming more of a backstory and personality.  Lord knows, most Prince Charming types could use it.  Also, despite myself, I’ve found myself liking the young and dashing version of Captain Hook they’ve created (though, he is still a codfish).  So, there’s another dead end.


It could be that they haven’t really branched out into more unfamiliar tales.  They have the platform to introduce the TV-watching world to all sorts of lesser known folk tales and children’s stories.  Instead, they stick with the more familiar household names.  I suppose I can’t fault them for giving people what they expect, though.  If I was upset with people for that, I'd be upset with almost everyone who's ever made a fairy tale based show or movie.


It could be the writing.  There are times when the heroes of this show come across as downright dumb.  Also, the first half of this season was largely about the main characters wandering around an island engaging in some rather forced inter-personal drama.   However, I have actually watched and enjoyed worse written shows than this.


I think what it might come down to is tone.  What this show essentially does is take fairy tale characters and strip them of their happy ending.  When you get right down to it, fairy tales without the happy endings are kind of dismal.  The happy ending is the payoff for all the terrible things that happen.  Fairy tale protagonists suffer as they find their way towards happiness.  Without that “happily ever after”, they just go on about their bleak lives being mistreated by their evil stepmothers or whatever.  The show is also filled with magic, but none of it is ever good.  None of it is wondrous.  One often repeated statement is “All magic comes with a price”.  So, now they suffer for the use of magic as well.  It’s such that, at the beginning of this season when Henry made a big deal of saving magic, I had to wonder why.  Surely, most of these characters would be better off without it.  The funny thing is, the show’s creators have said that one of the show’s major themes is “hope”.  The problem is that they haven’t managed to sell me on this hope.  The show doesn’t feel particularly hopeful and without that hope, a lot of the fun gets sucked out of fairy tales.  Even the darkest fairy tales often hold onto the notion that the happy ending is right around the corner, but I don’t get that feeling from Once Upon a Time.  In comparison, we can look at my favorite show: Doctor Who.  I know people will say that this is an unfair comparison, seeing as Doctor Who is a family show and Once Upon a Time is arguably aimed at adults (never mind that it’s a show about fairy tales featuring Disney characters and airing in the traditional 8:00 “family” hour on a Sunday).  However, the thing about Doctor Who is that as bad as everything may get, the show is always overflowing with wonder and hope.  Once Upon a Time could use a little bit of that.  It needs to make me feel like the happy ending is coming.


Also, this may just be storyteller’s pride, but I just always feel like I could tell these characters’ stories better.


Oh well, this one's been kind of focused on dislike, so I’ll try to make a more positive post for next time.  Any thoughts on Once Upon a Time, post in the comments below.
Posted by Adam Hoffman at 7:18 PM