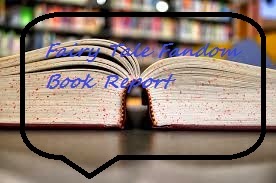 Last week I produced kind of a negative post about the problems I had with ABC’s Once Upon a Time.  I thought this week I might counter with something a little more positive.


Now, are there any fans of children’s literature out there?  Sure there are!  Almost everyone’s warmed up to “kid-lit” since the Harry Potter books came out.


Anyway, I thought I’d take a little time to focus on one of the many children’s book series’ that have popped up in recent years based on fairy tales.  Specifically, I’m going to focus on a series that uses a very similar concept to Once Upon a Time, and which I think handles it in often a more entertaining matter.  I’m talking about the Sisters Grimm series 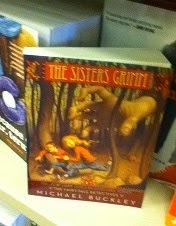 by this fella, Michael Buckley: 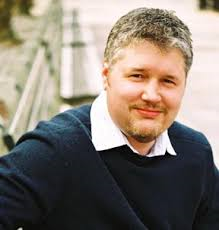 Yes, I know this series has already been out for a long time and has ended already (2005-2012).  But I didn’t have a blog back then.  Also, I’m the type who tends to dig up old stuff to read more than new stuff (usually, my reading material consists of folk tale books than can be anywhere up to 200 years old).

Anyway, the adventure starts out with Daphne and Sabrina Grimm on a train headed to the town of in upstate with their caseworker, a rather unpleasant woman named Minerva Smirt.  The Grimm sisters are orphans ever since their mother and father disappeared with the only trace being a car with a red handprint on the windshield (paint, not blood).  Now, after a string of bad foster parents, they’re going to live with their grandmother.  There’s only one problem.  Their father told them that their grandmother died before either of them was born.


Well, it turns out that there’s good news, bad news and weird news.  The good news is that this woman, Granny Relda, really is their grandmother.  The weird news is that the town of is actually a town filled with numerous characters from folk and fairy tales called Everafters that have become stuck living in this town.  Granny Relda is a fairy tale detective whose job is investigating the many magical crimes that happen in Ferryport Landing.  The bad news is that the reason the Everafters are stuck there is because the girls’ ancestor Wilhelm Grimm used magic to make it that way.  Now, the Grimm family is hated because of it.


Alongside the girls and Granny Relda, the main cast also includes her friend Mr. Canis (who has a secret of his own), Relda’s huge dog Elvis and Puck.  Yes, that Puck.  The one from William Shakespeare’s A Midsummer Night’s Dream.  The same one who made appearances in Disney’s ‘90s cartoon series Gargoyles.  Only, in this case, the self-proclaimed “trickster king” appears as a blond, mischievous 11-year old boy in a green hooded sweatshirt.  He’s still got a lot of magical power though.  Puck’s probably my favorite character in the series.  I’ve got a soft spot for tricksters, provided they’re more mischievous than malevolent.


There are nine books in the series.  I’ve read two of them.  Not because I dislike them, though.  It’s more like I lost track of the series when other interesting books popped up (I really must put books 3-9 on my to-read list under the 150 other books on the list).  Luckily, if I need a refresher, there’s a wiki to help.  Anyway, on the subject of fairy tale characters stuck in our world, what I read from the Sisters Grimm was a pleasure.  While there was some of the necessary darkness of fairy tales (albeit a type appropriate for children), there was also a bit of a sense of humor.  The books had a little bit of a twinkle to them.  Humor is usually a good way to win me over.  I say, if you’re a fan of children’s books or fairy tales and haven’t tried this series yet, give the Sisters Grimm a try.  You’ll probably be glad you did.
Posted by Adam Hoffman at 6:06 PM