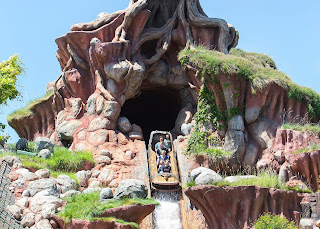 [Anaheim, daytime, outside the gates of Disneyland.  A small but not insignificant group of protestors has gathered]

[The gate opens a little and a hand hastily pushes our resident Fairy Tale Geek out.  Gate closes and locks behind him]

FTG: [to unseen gate person] “Gee, thanks.” [brushes self off]

[To Protestors] “Hello, my name is Adam, sometimes known as the Fairy Tale Geek, and I’ve been commissioned by the Walt Disney Company to talk to you about the upcoming changes to your favorite ride.  First, I’d like to thank you all for being here while there are many, many, many, MANY more important protests you could have attended . . . “

Protestor 1: “Cut out the glad-handing!  Say what you need to say!

FTG: “This all starts with a man named Joel Chandler Harris.  Well, actually, it starts with folk tales being told in West Africa for hundreds of years . . . But let’s start with Harris instead.  Harris was a writer living in the American South, specifically Georgia, during the 19th Century.  When he was working at a newspaper located on a plantation, he struck up a friendship with some of the slaves living on the plantation and heard them tell stories about animal characters like Brer Rabbit and Brer Fox.  These stories were regional adaptations of African stories about the African Hare, who was often depicted as a trickster figure.  Because of certain quirks of his upbringing like his lack of a father and chronic shyness, Harris often felt like an outsider and would feel a kinship with the Black slaves even though their situations couldn’t be more different.  After the Civil War, he actually supported regional and racial reconciliation.”

FTG: “Oh, hell no!  While slavery was still going on he was all for it, even though he considered himself a friend to slaves.  You’d be amazed what kind of contradictory things the human mind can reconcile.

Anyway, years later he would transcribe those stories that he heard in the slave cabins and build a framing sequence around them using a Black character named Remus that he developed when working at a different newspaper.  Originally, Remus was a comical figure, but as Uncle Remus he became a sort of homespun sage who passes wisdom on to the child of the plantation’s white owner.  The books were a huge hit and would remain so for years and years even into the early 20th Century and the Midwestern childhood of one Walter Elias Disney.”

Protestor 4: “What does any of this have to do with Splash Mountain?!”

FTG: “Well, I’m getting to the point where I explain the history of Song of the South.”

FTG: “[SIGH] Well, anyway.  It’s safe to say Walt Disney was a fan of those stories.
So, in 1946 Walt Disney released a live action/animation hybrid film based on Harris’s Uncle Remus books titled Song of the South.  It featured young Bobby Driscoll as Johnny, the little boy from the stories and James Baskett as Uncle Remus.  It also featured various animated segments starring Brer Rabbit, Brer Fox and Brer Bear that were supposed to represent the stories Uncle Remus was telling Johnny.  The script had been written by Dalton Reymond, a White writer.  Disney then hired African-American writer and performer Clarence Muse to consult on the screenplay, but Muse left the project when Reymond refused to listen to any of his suggestions.  The movie itself met with mixed reviews even then.  Critics generally said it was boring, especially the live action parts.  Looked upon more favorably were the short animated segments and the song “Zip-a-Dee-Doo-Dah” (which you should know has a racist history all its ownthat I can’t explain right now).  Even then, there were concerns about racial stereotyping and depicting the reconstruction South in an overly positive way.  Heck, there were even protestors like yourselves.  One of the biggest things was that James Baskett wasn’t even allowed to attend the premiere because it was held in a Whites-only theater in Atlanta, Georgia.” 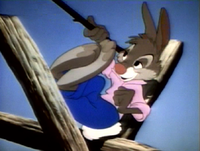 FTG: “Moving on, decades after the movie was made and rereleased in theaters a number of times, we get to the late ‘80s.  And at this point in the ‘80s, imagineer Tony Baxter has a handful of problems.  One, the Bear Country part of the Disneyland park is seeing a lot less traffic.  Two, An attraction called America Sings was closing and a number of animatronics designed by the veteran animator Mark Davis were potentially headed for the scrap heap.  Three, newly minted CEO Michael Eisner had told Baxter to come up with some more thrilling rides that would attract a teen and young adult audience to the parks.  And four, attractions supervisor Dick Nunis kept pushing to include an old-fashioned log flume ride in the Disney Parks.  The answer to all these problems was Splash Mountain, which he thought of while stuck in traffic.  Splash Mountain was a log flume ride with a thrilling drop.  It could be placed in Bear Country which would be renamed Critter Country.  And because Mark Davis was the lead animator on Song of the South, they could recast the various animal characters from America Sings as sort of extras in the world of Brer Rabbit and company without the designs looking too out-of-place.  There were a couple of hiccups.  The ride was going to be called the “Zip-a-Dee River Run” but Michael Eisner asked them to change the name to “Splash Mountain” because he wanted to use the ride to promote the new Touchstone Pictures movie Splash.  He also wanted them to add a mermaid character too for that purpose, which Imagineering pushed back against.  But the attraction was very popular and two more opened at Walt Disney World and Disneyland Japan.

Now, we look back at all this history and we see all these names.  Joel Chandler Harris, Walt Disney, Dalton Reymond, Tony Baxter, Mark Davis, Dick Nunis and Michael Eisner.  Who does it seem like was mostly left out in the evolution of this ride that depicts characters from African-American folk tales?”

Protestor 2: “What about that Basket guy?”

FTG: “James Baskett?  Who wasn’t even allowed to view his own movie at the premiere?  There’s also Clarence Muse whose input was ignored.  I didn’t even mention the slaves that Harris got the stories from like Uncle George Terrell, Old Harbert and Aunt Crissy.  People don’t even credit them as the storytellers, always crediting ‘Uncle Remus’ who was created by Harris.

Look, I’m trying to point out that the retheming of Splash Mountain to The Princess and the Frog has the potential to be a good thing in a number of ways.  The Princess and the Frog is a good movie with memorable music.  The retheme will allow them to give the ride a facelift after thirty years, including replacing the America Sings animatronics which are old, actually dating back to 1976.  And, most important of all, by getting rid of one of the last parts of Song of the South’s legacy, we can try to put a cap on that specific era of pop culture.  Now, Black writers and artists can have a little more elbow room to reclaim their own folk stories and reinterpret them in a way that’s meaningful to them in the modern era.  Heck, while maybe it’s not ideal, a big company like Disney could even help bring those visions to a wider audience.

FTG: “Oh, well, it's not a movie thing or a theme park thing.  There’s a book titled Tristan Strong Punches a Hole in the Sky that’s by an African-American writer, Kwame Mbalia.  It’s from the Rick Riordan Presents line.  You know, Rick Riordan from the Percy Jackson series . . . “

Well, anyway, it’s about a young Black boy from Chicago who ends up going into the world of African and African-American tales.  Among them are Brer Rabbit and Brer Fox.  Guess who published the book.” 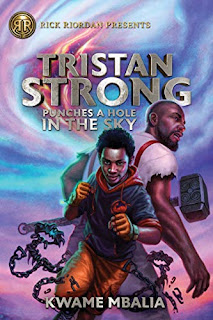 Protestor 1: “AGGH!  You guys are forgetting why we’re here!  We still have concerns about the ride!  Like, the placement of it.  Sure, at Disneyland they can extend New Orleans Square, but won’t it be weird in Disney World to have a Princess and the Frog ride in Frontierland?!”

FTG: “No weirder than it already is.  The Brer Rabbit stories were African stories that were transplanted to Georgia.  None of them have anything to do with the American frontier.”

FTG: “Yeah, it is.  And change can be tough to deal with.  I know that.  But it’s got to happen.  It’s what Walt Disney would have wanted too.  It may sound strange coming from a guy who built an entertainment empire on nostalgia, but he always said that Disneyland would never be finished.  That as long as there was imagination, that it would always be growing and changing.  And this is a change that can be made to close a chapter on a troubled past and hopefully create a better future.  After all I said, you know it’s a good idea.”

FTG: “So, since we’re all still here, this seems like a good opportunity!  Why don’t we all just have a frank discussion right here about the effects of cultural appropriation in adapting folk stories for family entertainment?”

[Protestors drop their signs and start walking away]

Man-in-Suit: “Very good.  The Walt Disney Company thanks you. “

FTG: “And my compensation?”

Man-in-Suit: “Right!  Right!  Keep an eye on your mailbox.  We’ll send you a check and maybe a Disneyland t-shirt or something!”

FTG: “We talked about this.  I told you I want tickets to the press screening of Mulan.”

[Man-in-Suit walks back in the gate and locks it behind him.]

[FTG walks away humming “Zip-a-Dee-Doo-Dah”, silently cursing to himself that the song is so catchy]
Posted by Adam Hoffman at 4:37 PM No comments: