In the Doll House.

Okay, I knew I would have to do this post eventually, seeing as this blog focuses a lot on both fairy tales and pop culture.  I’ve kind of been having trouble getting myself to do it because of the subject matter, though.  But, I suppose if there are men on the internet who can post about My Little Pony and still be secure in their masculinity (and there are), I suppose I can write one post on this subject . . .


It seems that in recent years, a trend has popped up in the doll aisles of toy stores.  While the ever-changing yet somehow changeless Barbie still remains queen, there have been more and more dolls coming out with a basis in genre fiction.  There are dolls based on famous horror monsters, witches and aliens.  It isn’t the first time that toy companies have made fashion dolls with a little more character.  People my age and a little older will remember Jem (who was, in fact, truly, truly, truly outrageous).  Now, with horror and science fiction covered, would it be so surprising to see fairy tales be the next subject?


Of course not!  Fairy tales have been part of the fashion doll scene for a long time.  Every time Mouse Ears Inc. (aka Disney) makes a movie with a princess in it, there is naturally a fashion doll to tie in with it.  Also, I’m certain there have been at least half a dozen fairy tale Barbies out there (ever notice that no one makes boys' toys based on fairy tales?  Come on!  Where’s our Jack action figure with “ax-swinging action”).  However, I’m not sure it’s ever been done with the level of world-building that’s become attached to it.


The great majority of these worlds are built around one idea: a school for fairy tale characters.  Incidentally, this is also the concept behind the children’s book The School for Good and Evil by Soman Chainani, which I’m currently reading (I’m catching up on my fairy tale inspired fiction).  Keep in mind that I haven’t had much chance to get a close up look at the actual toys because, well, I’m a grown man in his 30s with no kids.  So, most of my opinions come from the ancillary material related to these properties.

The first variation of this concept that I just happened to stumble upon is a line of dolls called Fairy Tale High made by a company called S-K Victory.  The basic concept is that a group of famous fairy tale characters during their teenage years attend the titular high school, which also happens to be a school for the performing arts.  The cast of characters includes Snow White, Belle, Sleeping Beauty, Cinderella, Alice (of Wonderland) and Tinker Bell among others.  There are some web cartoons, they’re not really much to look at compared to the ones from other properties (more on that later).  Looking at it, it seems like a decent enough toy line but kind of shallow.  I suppose the performing arts school idea will appeal to little girls who see similar concepts on Nickelodeon and Disney Channel.  The people behind the concept just don’t seem to do much with it or the fairy tale angle.  I have a feeling that if I were a dad with a little girl, I’d have a hard time sitting through a Fairy Tale High movie with her if one existed.


On the other hand, there’s Ever After High.  Following in the footsteps of their hit Monster High line of dolls, Mattel launched a similar line based around fairy tales.  The concept of Ever After High is that the children of famous fairy tale and story book characters go to a school where they’re taught to follow in the footsteps of their famous parents.  Exactly in their footsteps.  You see, according to their school headmaster, the kids have to live out the stories of their parents or else the stories will fade from existence and all who are connected with it will disappear as well.  Now, the school is split into two factions.  The Royals, with lead character Apple White (daughter of Snow White) who are fine with this and want nothing more than to live out the same happy ending as their parents.  And there are also the Rebels, with lead character Raven Queen (daughter of the Evil Queen) who wish to deviate from the plot and take the risk of writing their own destiny.  Kind of an odd concept for a line of fashion dolls.  You see, there’s a web series, though.  You can find episodes here (there’s also an amazingly catchy theme song).  I watched a few episodes to research this article.  And then a few more . . . and a few more.  Okay, here’s the thing.  Much like the most recent version of the My Little Pony cartoon, which I mentioned in the first paragraph, the web toons are much better than they have any right to be.  What could have been a really shallow girls’ cartoon about princesses actually plays rather adeptly (if not always deeply) with the notion of following your predetermined destiny versus taking the risk of setting your own course through life.  There are also some nice references to more obscure fairy tales in the background (the Home Evilnomics teacher is Baba Yaga, who most kids wouldn’t know offhand).  Also, there are some surprisingly funny bits.  One of my favorites is how one character, Maddie Hatter, who I actually have a picture of right here . . . 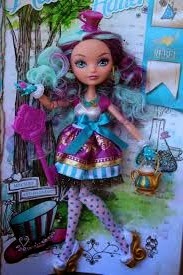 by virtue of being mad can hear the narrators talking when no one else can (there are two narrators and they bicker all the time).  If I had a little girl, I’d have no problem with her being into Ever After High.  I’d probably even be able to stomach sitting through the web cartoon with her . .  . depending on how many times she wanted to play them.  I wonder sometimes if the quality of this line has anything to do with the involvement of Shannon Hale.  Shannon Hale is a Newberry Award winning author who has written books both for adults and young readers.  She also has serious fairy tale cred because she wrote The Goose Girl, a young adult novel that adapts a Grimm’s fairy tale.  Now, if you look at the recent and upcoming Ever After High novels, you’ll see that the author of the books is . . . Shannon Hale.  I don’t know if Hale was involved with the web cartoons either in the form of a series bible or even scripts, but I know that if I was able to get a Newberry Award winning author working on something, I’d certainly try to get them as involved as I could.


The trend doesn’t end there, though. According to the internet’s best fairy tale newshound InkGypsy over on her site Once Upon a Blog, the Mouse is ready to get in on the craze.  Disney has lined up a Disney Channel live action special entitled Descendants, which focuses largely on the children on famous Disney villains in high school.  It’s going to be directed by the same person who directed their hit High School Musical.  There’s no official word on whether or not this will coincide with the launch of a doll line, but I wouldn’t doubt it when you consider that Disney rarely passes up a chance at a merchandising deal.  No one quite knows where this trend may end, but if any of it’s as surprisingly good as Ever After High’s web series though, it may be worth a look.


Now that that’s over, maybe I can get back my “Man Card”.


Any thoughts on the franchising out of fairy tales into toys and cartoons past or present, make your thoughts known in the comments section below.

[picture courtesy of www.flickr.com]
Posted by Adam Hoffman at 7:39 PM