I had been thinking about doing another one of these for a little while.  I even recently got some good feedback from someone about them.  So, here we are.  This is the (largely untitled) column in which I point out the connections between fairy tales/folklore and modern popular media.  You remember, I did one for Doctor Who and one for Star Wars.

So, which piece of modern media am I going to look at this time?  Would you believe Mighty Morphin Power Rangers!?

Well, if you did guess that, then you’re both right and kind of wrong.

You see, I’m actually taking it back to the Power Rangers’ source material.  I’m talking about a series of shows known as Super Sentai.

The way it works is this, ever since the 1970s Japanese television has had a series of kids’ superhero tokusatsu (special effects) shows made by Toei called Sentai.  The first was Himitsu Sentai Goranger (Secret Squadron Goranger) that ran from 1975 to 1977.
Most of these shows last for about a year and each one has a different theme and actors as well as a story with a beginning and an end.  All the shows were very heavily focused on toy-friendly elements and all of them had the color-coded heroes.  Starting in the 1990s, an American company called Saban started importing the Japanese footage and cutting it together with American footage to create Power Rangers and pop culture history was made.

Personally, in terms of popular culture, I was really much less of the generation that loved Mighty Morphin Power Rangers and more from the one that loved Teenage Mutant Ninja Turtles (keeping to the theme of pop culture properties with ridiculous names).  However, my love of superheroes and fantastical fiction and my fascination with Japanese pop culture eventually led me to the property and Super Sentai.  I must say, I am actually rather fond of the show now.  There’s a certain sincere unrestrained, over-the-top quality that the show has.  As if the creators of the show never actually ask themselves if they’re going too big or too ridiculous.  Don’t get me wrong, the show is just about as cheesy as it’s American counterpart.  However, it seems more honest in its cheesiness.  Also, I find their pre-fab/ variations of a theme approach to superheroes to be interesting.  And lucky for American audiences, a company called Shout! Factory has started importing uncut Super Sentai and offering it on DVD! 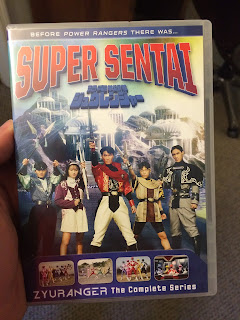 So, let’s get started!  For this column, I’m going to be focusing on a show called Kyoryu Sentai Zyuranger (Dinosaur Squadron Zyuranger).  This is the show that got cut and re-edited to create the first season of Power Rangers.  It’s actually kind of easy because it’s from a run of fantasy inspired Sentai shows (I never said I wouldn’t go for the low hanging fruit).  The plot is this (and it gets a little wiggy, so bear with me): 65 million years ago was the age of the dinosaurs.  However, the age of the dinosaurs turned out to also be an age of humans in warring clans with witches, knights, princes and kings.  The witch Bandora brought about the end of the dinosaurs but warriors from five of the clans trapped her in a magic jar on the rogue planet Nemesis.  The five warriors are then put in a long sleep so that they may be woken if Bandora should ever return.  They are Geki the TyrannoRanger (Red), Dan the TriceraRanger (Blue), Boi the TigerRanger (Yellow), Goushi the MammothRanger (Black) and Mei the PteraRanger (Pink).  Naturally, they’re woken 65 million years later in modern Tokyo where they fight the good fight using super-suits, weapons and the help of their gods which conveniently resemble (and assemble into) giant robots.

So, how does this show call on fairy tales and folklore?  Well, I’m going to conveniently split this up into three parts.

The Villains
There is no way to get around this: the main villain is a wicked Witch.  It is the go-to female villain for almost anything fairy tale.  Bandora (Rita Repulsa in the American version)  is walking in the same footsteps as the villains from “Rapunzel”, “Hansel and Gretel”, “Frau Trude”, “Snow White” and many others.  The villains are where the main fantasy components come from.  While most of her henchmen are strange creatures that are hard to place in any mythic/folkloric tradition, the disposable monsters she sends are all generally based on creatures from folklore and mythology.  It’s mostly Western mythology to boot.  Power Rangers downplayed this by giving the monsters new, silly names.  However, the subtitles of the show attest that there were monsters based on Pixies, Unicorns,  Goblins and Djinn as well as creatures from Greek mythology like Chimaeras, Sphinxes, the giant Argos and even a pig monster inspired by the myth of Circe.  One notable monster even draws on the story of “Snow White” a little bit.  Dora Ladon is a monster based on the serpent that guards the golden apples of the Hesperides in Greek mythology.  However, though he’s decidedly based around a different apple-centric story, he starts off the episode by offering Mei a poison apple like the Queen in “Snow White” does.  One difference between Mei’s predicament and Snow White’s is that while Snow White is awoken by outside forces, Mei must fight through it herself in the dreams and hallucinations she has after being poisoned.

Burai the Dragon Ranger
To some extent, all the Zyurangers have a little bit of “Sleeping Beauty” in them.  When the age of the dinosaurs ended, they were all put into a sort of suspended animation so that they could wake up far in the future.  So, in addition to some “Sleeping Beauty”, there’s also a little bit of “UrashimaTaro”, a Japanese fairy tale which ends with a man returning to his home village after centuries away.  The show itself doesn’t really delve much into it.  The first Zyuranger we actually see wake up is Burai the Dragon Ranger, though.  Dragon Ranger is the Green Ranger in American Power Rangers.  Burai originally shows up as an antagonist but later joins the team.  His awakening doesn’t really remind me of “Sleeping Beauty” or “Snow White”, though.  It makes me think of something that’s not quite fairy tale but fairy tale-adjacent.  It reminds me of the Welsh legend of “King Arthur’s Cave”.  We’ve all heard the whole bit about how when Britain is in its darkest moment, Arthur will return to set things right.  Usually, the story goes that he’s on the mystical island of Avalon.  The Welsh story tells a different tale.  In this, he and all his knights are asleep in a cave.  It’s in a cave, or rather more of a buried temple, that Burai wakes up in.  Burai, during his stint as one of the good guys does have a much more straight-forward connection to “Sleeping Beauty”.  There’s an episode that name drops it directly.  In this episode a little girl who’s friends with Burai is put to sleep by the dark forces and Burai has to find her and wake her up.  The monster in the story is even based on the spinning wheel from that story.  It’s just this big, spiked wheel that flies around and knocks people over.  A reference to a much more obscure fairy tale occurs earlier when a major development about Burai is revealed.  This is a pretty big SPOILER, so if you don’t want it don’t continue reading.  Anyway, it turns out that Burai is living on borrowed time.  He had actually died during his long slumber but the forces of good conspire to keep him alive for a while longer.  It can’t last forever, though.  So, in order to extend his life he has to stay in a room where time will stand still for him.  The room is filled with candles, including a green candle representing his own life.  As long as he stays in that room, the candle doesn’t burn down any more.  The idea of candles representing people’s lives is a very memorable image.  One of the places it can be traced to is a Grimms’ fairy tale entitled “Godfather Death”.  The story also deals with what happens when you try to tamper with one’s own life-candle.  Give it a read if you’d like.

Fairy Tale Logic
Ever notice in fairy tales that things don’t always seem to follow the normal flow of logic that would happen in the real world?  Like how a prince needs a shoe to identify a woman he danced with all night or how putting an old woman’s night cap on a wolf automatically makes the wolf unrecognizable, or how in “The Boots of Buffalo Leather” the soldier seems to pull a magic power out of nowhere to deal with some robbers.  This all contributes to the sense of “unreality” that fairy tales often have.  A similar sense of unreality also exists in Super Sentai.  It especially exists in this one.  In fairy tales, every disguise seems to work, no matter how bad it is.  There’s a scene in “The Fitcher’s Bird” in which the heroine dips herself in honey and rolls around in feathers to disguise herself as a bird.  Similar things happen in Zyuranger.  There’s a scene where the Dora Monster version of Frankenstein’s Monster is supposed to be disguised as some kind of worker.  However, the monster just has a bandana tied around its head.  And it looks like a Frankenstein monster with a bandana tied around its head.  No one recognizes it.  By the same token, the Zyurangers always seem to be going around in the same knightly and princely garb that they were put to sleep in 65 million years ago.  No one around them seems to think this is strange.  In fact, no one even seems to suspect they’re the Zyurangers until they transform right in front of them.  There are other things too.  At one point, four of the Zyurangers are watching one of their members fight a monster on the TV.  The fight is being broadcast by the bad guys.  Then, when things are looking grim for their teammate, Geki turns to the others and says “Quick, jump into the TV!”.  Then they do it.  They just jump into the TV to get to the fight.  They had never been shown to have that ability before and they are never shown to have it again.  But it all just adds to the sense of fantastical unreality that is Zyuranger.

Zyuranger is far from the only Super Sentai show to reference fairy tales.  Boukenger referenced both “Cinderella” and “Momotaro”.  The characters of Toqger even went to a fairy tale town at one point.  Also, there was a “Frog Prince” reference in Magiranger.  The show can be a bit of an acquired taste.  Though, for those who are fans of it, I’m glad we can get an official release of it here in the United States.  Who knows, if Toei keeps making these shows, maybe there will be an Otogi Sentai (Fairy Tale Squadron) someday.
Posted by Adam Hoffman at 7:28 AM