I don’t get much chance to post about games, either of the video or tabletop variety.  Sometimes it’s an equipment issue and sometimes it’s a “having enough players” issue.  However, I managed to bring up the award-winning tabletop card game Once Upon a Time (no relation to the ABC television show) to the fellow members of my storytelling group once and they seemed intrigued.  So, we set up a time during our February meeting to play. 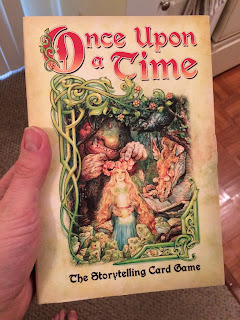 I figured this would, if nothing else, be a great gimmick for a review.  I got a group of professional storytellers to play a storytelling game.  Sounds interesting, right?  However, that might not be the case.  I’ll explain further in a minute.

Okay, so the group assembled consisted of myself, Sandy Schuman, Bonnie Mion, Eric Randall and Gil Payette.  You may be able to get to know more about them by clicking over to the Story Circle of the Capital District home page.

The way the game goes is that everyone is dealt a hand of cards.  These cards contain different types like Characters, Places, Aspects, Objects and Events. 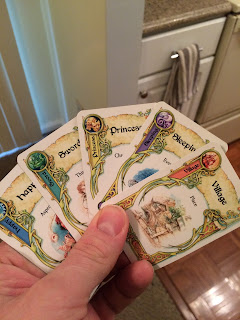 Everyone is also dealt one ending card. 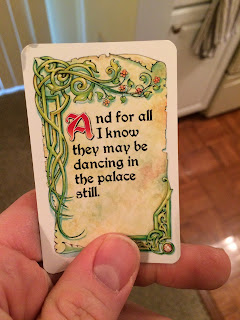 The object of the game is to tell a shared story, using up the cards in your hand and weave the story towards the ending card you’ve been dealt.  Along the way, if you stumble in telling the story, or you have in your hand something they mention, or if you have a special Interrupt story card you can interrupt the story and take over as the new storyteller.  People are not bound to the cards in their hand but they have to use them all to win.  Also, story cards have to be used for things that are major parts of the story and not things mentioned in passing.  There are also some other rules that are meant to legislate the course of the game.

Now, it didn’t seem like we made it through a single hand before it seemed like someone wanted to change the rules of the game.  We also had one player who always tried to finish the game in one turn and sometimes managed to do so, even if the end result was a bit of a stretch.

Now, why is this?  Why did there seem to be such discontent over the design of a game that has won at least five awards?  Well, I think it’s because I miscalculated how much fun the potential gimmick of my review was going to be in practice.  Basically, Once Upon a Time is a storytelling card game that’s designed for regular people and not storytellers.  The ability of one of our members to end a game in a single turn may have attested to that.  The skill level of some of us was beyond what the game was designed for.  Also, elements of the game that were probably included intentionally for fun didn’t go over as well with the players assembled.  For example, the stories in the game had a tendency of shifting in different directions rather radically or even randomly.  Things that were very important at the beginning of the story suddenly disappeared in later turns.  While this element may have been considered fun and potentially humorous to regular players, it kind of rankled a group of professional storytellers.  For people who are used to carefully crafting the stories they tell, I’m not sure they could see the appeal of telling stories that frequently went off the rails.

So, we kept trying to change the rules.  First we tried it with fewer cards.  Then we tried it with our hands showing.  And a couple other variations until we had to get the actual meeting underway.

I don’t wish to paint this as a bad game because I can see the appeal in its design.  However, I will say that it’s probably not for everyone.  You have to accept the randomness built into it and that there won’t be one coherent through line for the story you tell.  I’d definitely try playing it again with a less experienced group of storytellers and see how that goes before passing judgement.

Before I go, I would like to point everyone to the show Tabletop featuring Wil Wheaton that made me aware of this game.  I’d also like to point you towards some other tabletop games that feature fairy tale themes.  Ones like Winter Tales, Fairy Tale Gloom, Dark Tales, Tales of the Arabian Nights and Scary Tales.  I would also like to point out some games for younger players like Iello’s Tales and Games series.  There are also some games that draw on legends like Sheriff of Nottingham and Shadows over Camelot.  Whatever your gaming group, it looks like there may be a story-inspired game out there for you.
Posted by Adam Hoffman at 10:48 AM