Fantasy Literature Rewind: The Princess and the Goblin. 
Gah!  There’s got to be some work of children’s fantasy literature out there that’s old enough to be classic, but isn’t a giant series and hasn’t been done to death!


[Runs and turns on kindle]


When it comes to classic children’s stories, there comes a time when you get tired of all the usual suspects.  Your Carrolls and Collodis, Baums and Barries.  However, I may have something that will add just a little variety into the mix.  Today, we’re going to look at The Princess and the Goblin by George MacDonald. 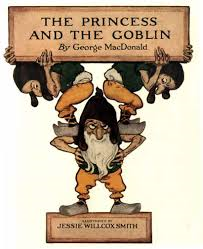 Who is George MacDonald?  Well, that’s an interesting question.  MacDonald is an interesting case in that he’s one of those authors that is so influential to those who came after him and to the genre in which he wrote while at the same time being largely forgotten by the general public.  MacDonald’s work has been cited as a major influence on the work of writers like W.H. Auden, J.R.R. Tolkien, Walter de la Mare, E. Nesbit, Madeline L’Engle and most notably C.S. Lewis who referred to MacDonald as his “master”.  He also served as a mentor of sorts to Lewis Carroll.  MacDonald was born in 1824 in Huntly, Aberdeenshire in .  He was raised in the Calvinist faith but had issues with many Calvinist beliefs.  This would have a great effect on his writing, as he would write many Christian apologetics as well as works of fantasy.  MacDonald was also apparently very well travelled in literary circles, there being pictures of him standing with the likes of Dickens, Tennyson and Wilkie Collins and was apparently friends with Longfellow and Walt Whitman during a time when he lived in .  His literary legacy does not just extend to his admirers, either.  MacDonald’s son Greville MacDonald published a number of literary fairy tales in addition to being a medical specialist and his grandson Phillip MacDonald became a well-known screenwriter.


The Princess and the Goblin was published in 1872.  The story focuses on an eight year old princess named Irene who lives in a grand palace while her father is frequently absent attending to affairs of state. 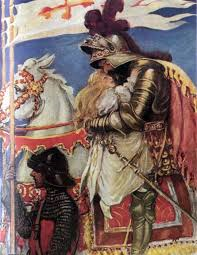 Irene does not know about the goblins who are her father’s enemies and live deep underground (compare these to the folkloric creatures known as knockers, kobolds or Tommy-Knockers).  The goblins were human once but were driven underground centuries ago and were malformed and distorted by their life there.  Goblins have certain weaknesses.  They are repulsed by sunlight, repelled by songs and poetry and the only soft, vulnerable part of their body is their toeless feet (which means it’s handy that they don’t wear shoes).  One day, Irene becomes bored and goes to explore the mansion.  Along the way she gets lost and then finds her way to a room where she meets  a beautiful, white-haired woman.  This woman tells Irene that she is her great-great-grandmother.  The grandmother has a certain magical quality that becomes important to the story later on. 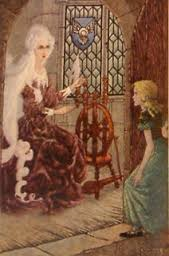 The next day, Irene and her nursemaid Lootie are out taking a walk and discover that they’ve been out too long and the sun is coming down.  Naturally, as they race to get back to the house, goblins come out to accost them.  Luckily, a twelve year old boy named Curdie shows up.  Using his knack for making up rhymes and verse on the spot, repels the goblins long enough for the two to get back to the mansion.  Now, Curdie is a miner boy and works the mines with his father.  The day following the daring rescue of the princess, Curdie stays longer in the mine to get some extra work done.  When he’s there he overhears the goblins talking and finds that they are planning something.  Curdie then resolves to find out what it is. 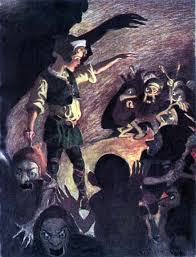 Okay, so the stage is set.  We’ve got Irene, the Great-great-grandmother, Curdie and the goblins are plotting away.  Now, as you know, I don’t like giving entire stories away on the blog.  This book does exist for free online, though.  Personally, I downloaded it for no charge onto my kindle.  I should note that there is also a sequel entitled The Princess and Curdie which I have not read yet.


Personally, I thought The Princess and the Goblin was a rather charming little children’s fantasy story.  I thought the way MacDonald incorporated poetry into the story by using Curdie’s verse as a weapon against the goblins was a rather nice little touch.  Also, the great-great-grandmother provides a wealth of positive fantasy concepts.  Among them are a light that can guide lost people home, a healing bath and a nearly invisible magical thread that figures rather heavily into the story.


The Princess and the Goblin has been adapted into different forms, including an animated movie, a ballet and even a Fractured Fairy Tale from Jay Ward.  However, it never seems to have the impact on the modern public the way that other children’s stories by other writers like Carroll’s Alice’s Adventures in Wonderland or J.M. Barrie’s Peter Pan do, among others.  MacDonald’s skill was greatly noticed by his contemporaries and by those who followed in his footsteps, and yet he remains forgotten by most of the general public.  I’ll be honest, I’m not sure I got as much out of this book as some of his admirers or even the children who read it at the time did.  However, it was nice to get a bit off the beaten path.  It’s with that thought that I’m going to end this blog post.  There’s a world of half-forgotten children’s fantasy literature out there that could stand being rediscovered.  So, for possible future installments of “Fantasy Literature Rewind”, I ask that you leave recommendations in the comments below and with aid of library and kindle I may seek them out.  Who knows what hidden gems we might find in that literary mine.
Posted by Adam Hoffman at 8:43 AM