Fantasy Literature Rewind: Through the Looking-Glass. Child of the pure unclouded brow
And dreaming eyes of wonder!
Though time be fleet, and I and thou
Are half a life asunder,
Thy loving smile will surely hail
The love-gift of a fairy-tale.


These are the first few lines of a poem that appears at the beginning of Lewis Carroll’s book Through the Looking-Glass.  You can tell from the text that the man was a fairy tale fan, even if it was only in terms of telling them to children.  Many scholarly types wouldn’t consider Carroll’s books to be fairy tales, though.  For the purposes of pop culture and this column, we’re going to include them.  Now, why choose Through the Looking Glass, though?  Well, it’s come to my attention that this book isn’t getting its due.  In fact, it’s the most curious thing.  Some people out there seem to be under the impression that Through the Looking Glass and Alice’s Adventures in Wonderland are the same book.  I mean, I suppose I can understand why this might be the case.  The two books share a primary character.  They also have a similar nonsensical quality to them.  Also, in popular culture, it has become common to cherry pick different bits of both books and include them all in adaptations of the Wonderland book.  One of the most notable is the animated movie made by those Mouse-Ears people . . . 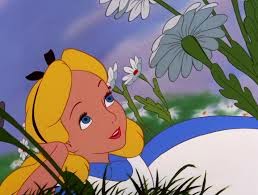 As well as more recent works like certain grown-up dramas also made by the Mouse-Ears people . . . 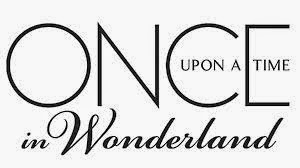 (Granted, I actually like that show a bit more than their other “Once Upon a Time” show.  I’m sorry to see it go now that it's cancelled).  Now, I know that most people don’t see this as a big deal.  However, I think that, because of this, Through the Looking Glass could use a little TLC (that’s “tender love and care”).  It deserves a little extra special attention and boosting because it hasn’t had it in a while. 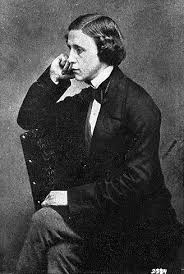 First, some background on the author.  Lewis Carroll was the penname of Charles Lutwidge Dodgson.  Dodgson was a mathematician, logician, Anglican deacon and photographer.  Let’s let the irony of that sink in for a second.  The amazingly nonsensical worlds of Wonderland and the Looking-Glass Country were created by a mathematician and logician.  He was one of eleven children and suffered from a stammer as well as a number of other physical ailments.  He did a fair bit of writing but it wasn’t until one day when he invented the story that would become Alice’s Adventures in Wonderland to the children of a friend that his fairy tale destiny was written.  One child, Alice Liddell, liked the story so much that she insisted he write it down.  He did and gave it to her as a gift.  He then showed the book to another friend, George MacDonald (author of literary fairy tale The Princess and the Goblin among others).  After an enthusiastic review from MacDonald’s children, Dodgson decided to get it published (some accounts say that he was urged on by novelist Henry Kingsley).  The book hit the stands in 1863 and was an immediate success.  The sequel Through the Looking Glass was published in 1871.  Other things have been said about Lewis Carroll, but I’m going to leave it at that, because I’m a nice guy.


Anyway, the story starts off with the ever-imaginative playing with her cat Dinah’s two kittens, one black and one white.  As she’s playing, she starts to wonder what it would be like to pass through the mirror over the mantelpiece and pass into the other side.  suddenly finds herself on the mantel, not knowing how she got there, and notices that the glass in the looking-glass has turned into a sort of mist and in a moment, finds herself on the other side of the looking-glass. 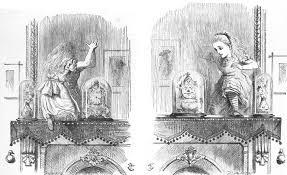 Inside the looking-glass house, she finds that things are just a little bit different.  Some items on the mantel that she can only see the back of through the mirror are different in the front.  She also comes across a collection of chess pieces that are all alive.  She takes a look at a book and realizes that she can only read it by putting it up to a mirror.  In the book, she finds the one poem that every children’s literature fan, fairy tale geek and Lewis Carroll scholar seems to take great joy in stumbling over.  That’s right, it’s “Jabberwocky”! 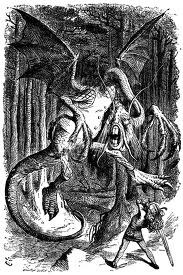 never actually meets the Jabberwocky, so don’t let fool you on that point.  then leaves the house and goes outside where she encounters some talking flowers and, more notably, the Red Queen. 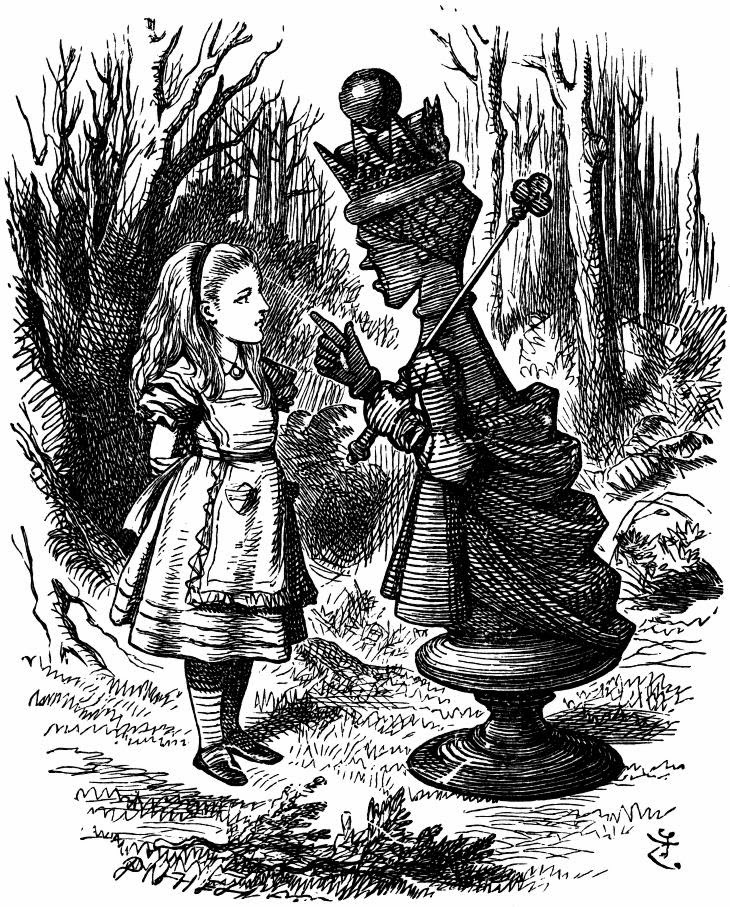 The Red Queen from the chess set has grown to the size of a human being and shows that the Looking-Glass Country is laid out like a giant chessboard.  After Alice muses that she would like to be a queen, the Red Queen tells her that it is possible if Alice becomes a White Pawn and manages to get to the eighth square on the chessboard (note: this is in keeping with the rules of chess.  A pawn that gets to the other side of the board can be exchanged for a Queen that has been captured).  This sets the stage for the rest of ’s adventure in the Looking-Glass Country as she moves from squares to square.  I think this is an interesting set-up, basing the adventure around a chess game.  Also, ’s goal of becoming a queen is interesting in comparison to her more directionless wandering in her trip to Wonderland.  Along the way, she meets a number of different unusual characters.  These include Tweedledee and Tweedledum who recite poetry for her, introduce her to an existential quandary regarding the Red King and then act out their nursery rhyme. She also meets the ever-famous Humpty Dumpty, who tells her what an un-birthday is, recites some more poetry and butchers the English language as he sees fit. 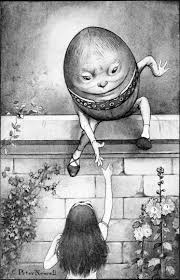 Other notables include the Lion and the Unicorn 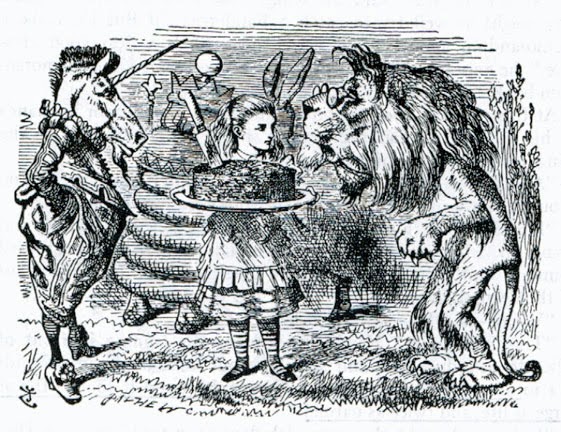 and the White Knight. 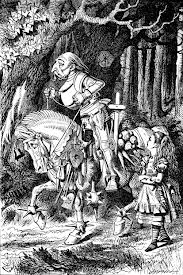 It isn’t long after that makes her way to the eighth square and becomes a queen.  I don’t want to give too much away because it’s better to read it than hear about it.  After all, you miss some terrific, nonsensical wordplay if you just hear about it.


Now, you may just be thinking “Well, that’s all well and good, but why’s it a big deal to focus on this book separate from Alice’s Adventures in Wonderland?  What makes this book different from the other Wonderland book?”  Well, you have a little bit of a point.  They’re both nonsensical, dream-like adventures featuring .  However, it should be noted that when taken together, there is far more nonsense in both than you can ever get in one of those “greatest hits” in Wonderland adaptations.  Also, Carroll scholars will point to other things.  The two books are kind of mirror images.  While Alice’s Adventures in Wonderland takes place in summer, Through the Looking-Glass takes place in late autumn.  While Wonderland uses cards, Looking-Glass uses chess.  However, there is one other thing that I personally noted upon reading this book.  Unlike the characters in Wonderland, the Looking-Glass characters are not mad.  It’s the world behind the looking-glass that is mad and the characters just comply with it.  Everywhere goes, the rules as she understands them do not seem to apply.  Or, rather, they seem to apply one moment and not apply the next.  Shortly after meeting the Red Queen, the Queen takes ’s hand and starts running at fantastic speed.  When they stop, notices they are in the same place.  The Queen tells her that this is because in that world, you have to run as fast as you can just to stay in one spot and run even faster to get anywhere.  This does not seem to make sense though, as walking at normal speed gets people to all sorts of places.  Later, the Lion and the Unicorn instruct in how to serve looking-glass cake which involves cutting it after it has already been passed around.  This happens throughout the book.  Tweedledee and Tweedledum manage to even call ’s reality into question by suggesting she was dreamed up by a sleeping Red King.  The only rules that seem to hold fast are the rules of the giant chess game that’s going on (which there are references to in ’s many interactions with the various chess pieces).


All in all, I think Through the Looking-Glass deserves a little more recognition apart from Alice’s Adventures in Wonderland.  Partially because of the interesting set up involving the chess game and ’s goal of becoming a queen, and also because of the unique nature of the Looking-Glass Country being a place where the rules never seem to apply for very long.  What say you?