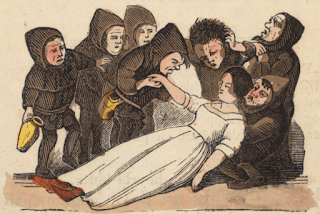 FTG: Now I’m going to offer Snow a certain piece of food and we’ll see how she reacts. [Turns to Snow]  Snow, how would you like a nice juicy apple? [presents apple to Snow]

SW: [slaps apple out of FTG’s hand] YOU KEEP THAT HORRIBLE THING AWAY FROM ME!

FTG:  Sad, isn’t it?  And all over a singular poisoning incident that happened something like 300 years ago.  Well, I think with the right recipe we can ease Snow’s fear of apples just a little bit.  For this I’m adapting a recipe from The Old World Kitchen by Elisabeth Luard, which is a cookbook based around recipes for European peasant food.  I did, however, tweak it to better suit the supplies and equipment in my kitchen. 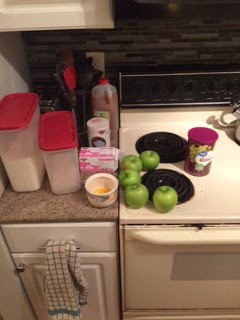 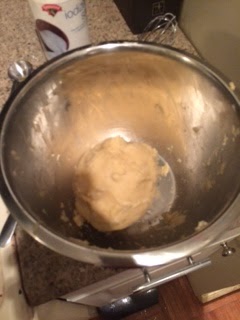 2)      Peel, core and slice the apples.  In a skillet or saucepan, lightly fry the apples in the butter.  Meanwhile, soak the raisins in the cider before adding them in with the apples. 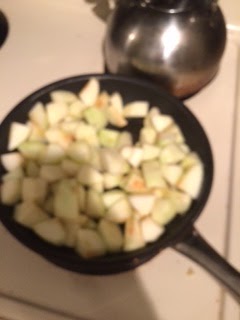 3)      Preheat the oven to 425 degrees farenheit.
4)      Roll out 2/3 of the pastry with a rolling pin and use to line the bottom of an 8 inch round cake pan.  Roll out the remaining 1/3 into a circle to top the dish.  Fill the pan with the apple mixture.  Cover with the rest of the dough, seal the edges and cut slits for steam to escape. 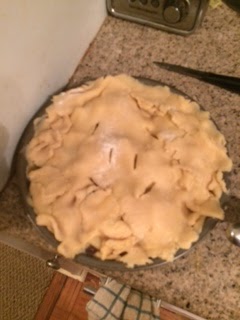 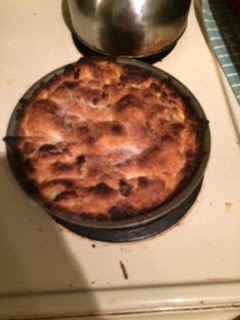 FTG:  And there you have it!  A nice German apfelkuchen to cure a German folk tale character’s apple-phobia.  Now, the moment of truth.  Snow, would you like to try some of this pastry I made? [Holds plate out to Snow]

SW:  Apfelkuchen?  I haven’t had that in a couple hundred years.  Well, I guess.  You know what to do in case of poisoning, right?

SW: [hesitantly takes a bit.   Face lights up upon tasting it]  MMMM!

FTG:  I should probably go over a couple of things like my substitutions.  The original recipe called for brandy.  I don’t drink alcohol and keeping brandy here in the Enchanted Condo would be a waste unless I made this recipe a lot.  So, since I still needed to keep the amount of liquid the same, I decided to replace it with another flavorful liquid.  You can adjust as you see fit.  It also called for a pie pan with a hinged side.  I guess that means a spring form pan like you’d use for cheesecake.  I tried it and it just didn’t work for me, so I instead made use of one of my trusty 8-inch round cake pans.  Something American readers will probably notice is that unlike a lot of apple recipes, this is an unspiced apple recipe.  A lot of modern apple recipes here in the U.S. are doctored up with warming spices like cinnamon, nutmeg, allspice and cloves.  This one isn’t and there are a couple reasons that may be.  For one, not ever country and culture may like their apples combined with warm autumnal spices.  For another, this is based on a very old recipe and at one time in history spices would have been not only really hard to get but expensive as well.  Either way, it means that this apple pastry actually tastes a lot more like apples than others might.  Another thing is that when searching for an apfelkuchen recipe, you may run across another recipe called apple kuchen or German apple cake.  It’s a cake with sliced apples on top.  Assuming that the recipe I’m working from is authentic, I assume that German apple cake is a German-American extrapolation of this dish.  I can’t say for sure, but it’s something to keep in mind.

SW:  This is very good.  And I’m not poisoned, which is great.  But I can’t stay around here.  I’m going to be late for my shift at work.

FTG:  Oh, I keep forgetting that you fairy tale characters have to work like everyone else now that you don’t really fit into the old monarchies and nobilities anymore.  Where are you working these days?

SW: I work at Cinnabon now.

FTG:  So, would that make you “the fairest of the mall”?

FTG:  Good night, everybody!
Posted by Adam Hoffman at 6:32 PM