And it’s all stuff that involves the Mouse.

First we had the announcement that Halle Bailey has been cast as Ariel in the live action remake of Disney’s The Little Mermaid.  Now, this caused quite a stir among a certain part of the internet.  This is because, in case you didn’t notice from the picture I’m posting, Halle Bailey is African-American.  The arguments posted against her casting were filled with disjointed reasoning (usually involving the argument that Ariel’s hair should be red), false equivalences, and nonsensical calls for literary, historical and scientific accuracy.
Personally, I’m all for it.  I haven’t seen any of her performance yet.  I have heard a little bit of her singing though, which is good.  There’s a certain principle I want to support, though.  And I’m all for more opportunities opening up for actors and actresses of color.

Another thing is that Cameron Boyce, the actor who played Carlos DeVil in Disney’s Descendants movies was found dead as a result of an ongoing medical condition he had.  I really don’t have much to say about this except to offer my condolences to his friends, family and coworkers.  I may have described the Descendants movies as “stupid but harmless”, but I bore no ill will to the actors who put so much work into them.
The last thing that happened is the first teaser for Disney’s Mulan remake dropped (I was actually in Wal-Mart looking for a serrated peeler for a folk tale related baking project when I found out.  I stopped on the spot to watch it on my phone).  Take a look:
Now, you may not know, but the legend of Mulan holds a special place in our hearts here at Fairy Tale Fandom.  It was one of the more unique legends I commented on back when I was doing my 12-part legend project and sparked some of the most enlightened dialogue.

So, what do I think of this teaser?  Well, it looks good to me.  We see some stunning locations and sets.  We see Mulan’s family talking about her being matched by the matchmaker.  We see some military action scenes (which is good for what’s essentially a war story).  Liu Yifei appears to bring a sort of quiet strength to the role of Mulan.

There are some interesting changes from the 1998 animated Mulan film.  For one, her problem with the matchmaker doesn’t seem to be that she can’t be matched, it’s that she already has been.  There are also no signs of any wisecracking Disney sidekicks.  No dragons or crickets or ancestor ghosts.  I know some diehard Disney fans will disagree, but I actually see that as a good sign.  We also see more scenes of Mulan fighting out of disguise than I expected.

I also noticed in the description under the video on YouTube that instead of Fa Mulan which was her name in the 1998 movie, they use the more accepted and common name Hua Mulan.  Also, I noticed there were some more complex Chinese names among the characters compared to in the 1998 movie.  The animated film tended to keep things as simple as they could, especially in terms of names that were easier for Westerners to pronounce.  This time, it doesn’t feel like they’re going to hold our hand as much, which I appreciate.  I don’t know if it really means anything, though.

Mulan comes out in 2020 and that means that we’ve all got plenty of time to research the legendary figure of Hua Mulan before the movie comes out.  I suggest starting off with my blog post about what I think makes Mulan the stuff of legends.

I’m also going to recommend this book that I read before writing that post.  The Amazon link is HERE, but don't forget to check your local library or library system. 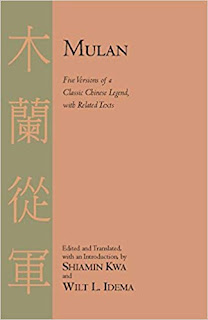 Also, I’ll suggest this movie for a more grown-up take on a cinematic Mulan.  It’s on Amazon Prime Video, but it’s only available ala cart so there is a fee. 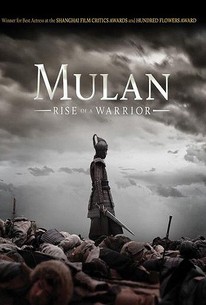 I’m going to say, I never expected to spend so much time playing up the Disney brand.  However, as long as the other studios in Hollywood have trouble making movies of older stories that are not either boring, dismal or miss the point of the story entirely (the exception being Fox’s King Arthur riff The Kid Who Would be King), Disney seems to be the only game in town.