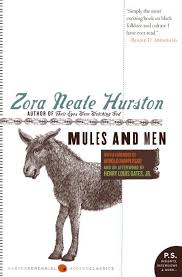 It’s hard to describe Mules and Men, exactly.  At least, if you don’t already know what “autoethnographical” means.  The book doesn’t read like a traditional folk tale collection.  The book instead reads like the story of Hurston’s research trip punctuated with stories and songs as she heard them from the people she encountered.  It’s actually a rather smart thing to do, as it puts the stories, songs and traditions presented in the context of the social lives of African-American people of that specific region and time period.  The closest thing they had to that kind of context previously in written form was the fictional plantation context created by Joel Chandler Harris for the Uncle Remus books.  The lore itself is a bit varied.  There are some traditions, superstitions and songs.  There are also stories, which are often referred to as “lies”.  It’s interesting, isn’t it?  The people in this book essentially hang a big old lampshade on the untruths in their stories.  Yet, it doesn’t diminish those stories.  Anyway, there are some porquoi stories and stories that reference local events.  Possibly the standouts are stories about a slave named John, who is always getting the better of his master.
Most of that was from the trips back to Hurston’s hometown and a lumber camp in Florida.  Hurston’s trip to New Orleans largely concerned voodoo and hoodoo (which may be the same thing, come to think of it).  A fair chunk of it featured Hurston studying under various practitioners and using the rituals to help paying customers.  Another fair chunk focused on stories about Marie Leveau, the legendary voodoo queen of New Orleans.
You know, it’s been a while since I actually read the book and I feel like I’m not doing it justice.  I do know its strength is that it’s not just another folk tale collection.  It’s also like a series of cultural snapshots.  I will say that it’s definitely worth giving a read.
Posted by Adam Hoffman at 8:40 AM