The Stuff of Legends: Washington Irving and the Legend of New York State. 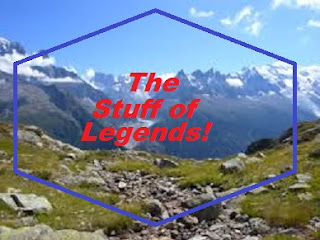 Hey, everybody.  It’s time for this year’s Scary Tale Fandom post.  I held a poll on Twitter to decide which subject I was going to post about this year.  Granted, I probably should have alerted people to the fact that the poll was going up, considering almost no one voted on it.  But still, I got one vote and that was for the stories of Washington Irving.  Now, I bet you didn’t expect the title card for “The Stuff of Legends” to come back for this, but I’ll get back to that in a moment.

I’m actually pretty excited about this one.  The reason is because both Washington Irving and his two most famous stories I’m going to talk about are from my home state of New York.  “What’s the big deal?”, you ask.  “Lots of stories happen in New York”.  Well, while it’s true that a whole lot of media in our modern world takes place in New York City, not many take place in the rest of New York State.  The city tends to overshadow the rest of the state to a great degree these days.  But “Rip Van Winkle” and “The Legend of Sleepy Hollow” are from the Catskills and Tarrytown respectively.  Heck, Washington Irving’s writing comes from a time before New York City was even all that big and important to begin with. 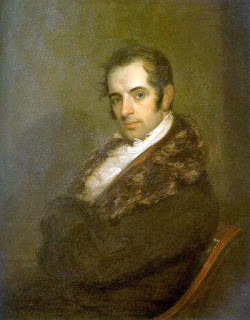 But first, some background.  Washington Irving was born in New York City in 1783.  He was the youngest of 11 children of Scottish-English immigrant parents.  Irving was trained as a lawyer and worked numerous jobs, but usually preferred to indulge his creative impulses.  In the years 1819 and 1820, a series of short stories and essays were published that would eventually be published as The Sketch Book of Geoffrey Crayon, Gent.  Two of these stories are the ones I’m going to talk about here.

Washington Irving clearly had an interest in folklore like many other writers did.  However, rather than being a folklore collector like some other literary sorts, he instead used lore to embellish and enrich his own literary works.  Or, at least, he seemed to.  It gets a bit complicated as I’ll tell you in a moment.

The stories he used here are ghost stories, which are a type of legend.  They have a sense of time and place that is very specific.  Some have real, historical figures in them.  But they might, and often are, more fiction than history.  That's why I've chosen to make this post "The Stuff of Legends". 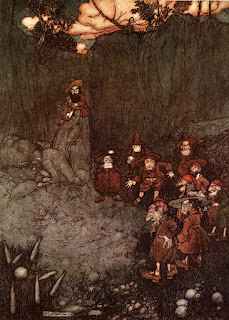 Let’s take a look at the story of “Rip Van Winkle” for instance.  The story concerns a man named Rip Van Winkle who prefers hunting and fishing and helping other people with their problems than dealing with his own.  One day, he goes out squirrel hunting to avoid his shrewish wife and comes upon a little man carrying a keg of alcohol.  He helps him and gets to place where the little man’s friends are drinking and playing ninepins.  Rip starts to drink himself, falls asleep and awakens to find the world changed.  It turns out that he was asleep for twenty years.  All his friends are gone and the British colonies in North America have had a revolution and gained their independence.  The story itself is solid.  It serves as a good exhibition of just how much has changed in the Americas over the course of one man’s lifetime (even if he slept through most of it).  The fantastical elements that facilitate this, the “magical machinery” if you will, stem from an old Catskill legend.  The legend states that while searching for the Northwest Passage, the explorer Henry Hudson sailed upriver for miles until he got to the Catskill Mountains.  Taking some men, he went into the mountains until he stumbled on some little men playing ninepins and drinking.  Hudson and his crew joined in but felt some side effects from the booze they were drinking.  For one, it transformed the men for a short time into creatures a lot like the gnomish people they were drinking with.  For another, it put them to sleep.  Not for as long as Rip Van Winkle was asleep, but for a while.  Hudson and his men left, but it’s said that whenever the “Catskill Gnomes” go bowling, they’re joined by the ghosts of Henry Hudson and his men.

This legend appears to be the real deal.  The story of “Henry Hudson and the Catskill Gnomes” is recorded in all sorts of places separate from Irving’s story of Rip Van Winkle.  The version I know best is on the American Folklore website right HERE.

The other New York story Irving’s famous for, might be a different situation. 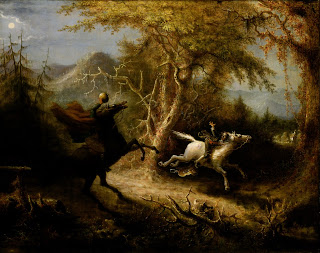 “The Legend of Sleepy Hollow” is by this time a seasonal favorite.  Every Halloween there are numerous movies, books and TV specials that invoke the story.  The story is about a schoolmaster named Ichabod Crane who comes to the small Southern New York town of Sleepy Hollow outside of Tarrytown.  Crane is an unusual fellow.  Thin as a rail, but a big eater.  Very learned but also very superstitious.  Crane’s head is turned by the wealthy and beautiful Katrina Van Tassel.  Katrina, though, has another suitor in the form of the strong, jovial, boisterous town hero Abraham Van Brunt aka “Brom Bones”.  One night, Crane attends a party at which tales are traded of the “Headless Horseman” or “Galloping Hessian”.  The Horseman was a Hessian soldier working for the British during the American Revolutionary War.  He lost his head to a cannonball and ever since then his ghost rides at night searching for his head.  One story states though, that he cannot cross a certain bridge.  On the way home, Crane loses his way and runs into the Headless Horseman.  Crane does all he can to get away from the spectral rider, but before he can cross the fateful bridge something happens and Crane disappears.  Brom goes on to marry Katrina and it’s heavily suggested that he actually dressed as the Headless Horseman and scared Crane away, though it’s never stated outright.
Now, my impression was always that the story of the Headless Horseman was a genuine piece of folklore from Sleepy Hollow, New York.  The other parts regarding Ichabod Crane, Brom Bones and Katrina Van Tassel may have been invented by Irving, but the Headless Horseman strikes me as a real ghost story probably adapted from events during the Revolutionary War combined with lore carried over to the colonies by Dutch settlers.  But I’m not sure it is.

I went looking for instances of the “Headless Horseman” story separate from Washington Irving’s story of the Crane-Van Tassel-Bones love triangle and they were decidedly scarce.  Almost every source I find name drops either Washington Irving or his three characters.  The one exception is American Folklore, which has a version of the story HERE.  Now, it’s not to say that the Headless Horseman isn’t a figure in folklore.  But it’s just as likely that Irving borrowed such a figure from somewhere else and transplanted them to Upstate New York.  There are plenty of such figures.  There’s the dullahan from Ireland.  There’s the Wild Huntsman in Germany.  There’s even something similar in the story of “Sir Gawain and the Green Knight”.

Now, I could be entirely wrong about this.  The Horseman could be an entirely real part of New York State folklore and the problem is just that Irving’s story has outpaced the original legend in terms of popularity.  But it’s not something I can confirm.  At least, not without a whole weekend freed up, access to the archives for the greater Tarrytown-Sleepy Hollow area and a few phone calls to the New York State Folklore Society.  I’m certainly not going to do it in connection to this blog post that I’ve just been kind of poking at for a few days in between work and the rest of my life.

There’s still a lot to love about the story, though.

The descriptions of the Hudson River Valley area in Autumn are fantastic.  While the story may not have been expressly devised as a “Halloween story”, the fact that it has become associated with the holiday isn’t a surprise.  The supernatural aspect of the story certainly fits and the descriptions place it in the most lovely part of Autumn you could imagine.  The whole combination automatically evokes late October.

Another thing I like is how Irving is capable of writing characters who kind of shift with your perceptions.  This is connected to what I refer to as the “Brom Bones Conundrum”.  Allow me to explain.  “The Legend of Sleepy Hollow” hinges on the conflict between Ichabod Crane and Brom Bones over Katrina Van Tassel.  The story expressly follows Crane as its “hero”.  Crane is a smart, bookish schoolmaster who likes to eat.  He also strikes quite the humorous figure with the way he’s described, lank with big ears, nose and feet.  He seems like the kind of character that readers like myself, seeing as I’m rather bookish as well, would like to get behind.  Or at least, the kind of hero that people would think is goofy and harmless.  But then, there are the things that attract him to Katrina Van Tassel.  Almost all of Crane’s interests in the young Miss Van Tassel are material.  He liked how much land her family has, how much wealth they have and how much food is in her family’s storehouses.  Truth be told, Ichabod Crane’s kind of a gold digger.  And while marrying for wealth may have been common in ages past, it certainly isn’t the kind of thing that would make someone the romantic hero of a short story.  Brom Bones on the other hand, is brawny, boisterous and loves playing practical jokes on people.  Again, for someone like myself who doesn’t quite understand the appeal of athletics and dislikes being the butt of pranks, he’s easy to cast as the villain.  Yet, he’s also considered to be the town hero.  Brom Bones is probably one of the people that the good folk of Sleepy Hollow would turn to if there was ever an emergency.  And he supposedly means no harm with his jokes.  We don’t know what attracts him to Katrina but the truth is he probably is a much better match for her than Ichabod is, if for no other reason than he’s a local boy who knows the land and people better and would be much better at managing the estate that she’s bound to inherit.  When I first read this story in high school I was so sure that Ichabod was the hero and Brom was the villain.  Now that I’ve encountered it again, I’m hesitant to put those labels on either of them.  Ichabod doesn’t seem so much like a hero as a silly, foolish character prone to superstition and greed.  Also, while I’m still hesitant to brand Brom Bones a hero, I certainly wouldn’t consider him to be the villain of the piece.  And all it took was a reread.

Well, that’s all I’ve got for now.  It’s back to hiatus for me after this.  You can still find me posting over on Universes Beckon, though.

Until next time I see you, take care.  And Happy Halloween!
Posted by Adam Hoffman at 7:39 PM