The OTHER gender issue with fairy tales.

Okay, so some of you may recall that I wrote a post about gender in fairy tales a while back.  Now, that post kind of tackled the issue of gender from inside the stories.  Now, I want to write a post that tackles them from the outside.

Basically, I want to talk about the image of fairy tales and how they’re marketed to the public.

Now, gendering in general is a big issue, in particular when it comes to things that are usually aimed at children.  It’s so big that Shannon Hale (award-winning author of The Goose Girl and the Princess Academy books) has seemingly been waging a one-woman war against gendering children’s literature on social media for the better part of a year at least.

Now, I’m going to get down to brass tacks here.  Despite the fact that maybe 50% of the tales in your average copy of Grimm’s Fairy Tales have male protagonists, it’s largely the stories with female protagonists that get remembered these days. 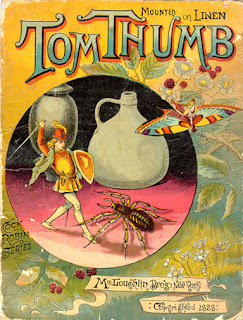 There’s nothing wrong with that.  The old wonder tales often did have more of a connection to women long ago because it was the mothers and grandmothers who were often the storytellers in the household.
The issue is that those who use fairy tales for their own purposes, namely those who market them for toys and storybooks tend to really push that association.  Everything starts to revolve around gowns and princesses and romance.  The color palette also takes a decided shift toward soft pinks and purples (an interestingly modern note, seeing as before the 20th century pink was considered more aggressive and masculine and blue was considered more placid and feminine.  These associations change over time).

So, in our world of gendered marketing, the breadth of European fairy tales that have made it into our common culture tend to be branded as “for girls”.  Mind you, with our modern mindset towards these things, I’m sure some girls get tired of the “pretty pink princess” thing too, but the association still stands.  I recall when I was very young I wasn’t much of a fan of fairy tales with one exception.  To me, “Jack and the Beanstalk” was the one acceptable tale to like.  That’s because while the other popular tales often seemed geared towards romance, Jack’s tale seemed like more of an adventure story to me.  It was also a decidedly “active” tale, what with all the climbing, stealing and ax-swinging.  At the time, most other tales with male leads like “Tom Thumb” and “The Brave Little Tailor” were only known to me by title and their stories were still obscure.  Also, the Arabian Nights were still a mystery to me.  It wasn’t until years later and a kindled interest in American legends and ancient myths that my interest turned to fairy tales and I was able to see past all the pink-washed marketing efforts. 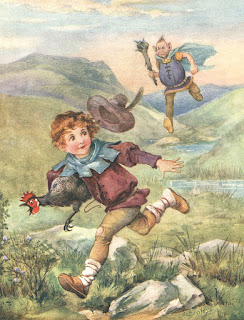 I mentioned the Arabian Nights a moment ago and I think they’re worth mentioning again for how they represent the opposite side of the gender-marketing double edged sword.  Since the days of The Thief of Baghdad, the Arabian Nights have been marketed more as adventure stories by the culture industry.  If Hollywood were to be believed, the Nights were constantly filled with adventure and daring sword fights with bandits and villains.  In short, they were marketed as something for a stereotypically male audience (note to female readers: stereotypes do not necessarily depict the truth.  I know some of you love rip-roaring adventures too).  The truth is that the Arabian Nights have a great variety of stories in them.  So, why do they get marketed this way?  Well, it’s probably because the three most famous character names in the Arabian Nights, Aladdin, Ali Baba and Sindbad, are all male (though, arguably, the bravest character in all the Arabian Nights is Sheherazad). 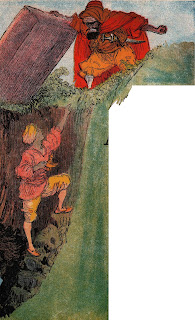 Marina Warner actually touches on the disparity in her book Once Upon a Time: A short history of fairy tale.  In chapter 6 of her book, “On the Couch”, she focuses on the psychological approach to fairy tales.  However, in one section she states how common it is to psychoanalyze the stories for their approach to femaleness and femininity while very few people have analyzed the various hero stories for their approach to masculinity.  The one exception she brings up is Robert Bly’s Iron John: A Book about Men in which the writer used the story of “Iron Hans” as the basis for a new approach to manliness.  There are numerous reasons why psychologists chose to steer away from the hero stories.  One of which is that fate and chance always seem to play a part in hero stories and chance is hard to analyze.

So, I may have digressed into psychology just a little bit.  Anyway, why is it important to think about how these tales are promoted and the broad strokes they’re brushed with?  Well, first of all, because there is very little to no reason to gender-market these stories to different demographics.  Despite what I would have told you when I was 6, European fairy tales are not about “princesses and kissing”.  Just like how the Arabian Nights are not about “sword fights and desert bandits”.  In my adult experience, fairy tales are most often about the transformations in a character’s life, moving from poor to rich or servant to royalty.  It’s a practice that strives to exclude more than it strives to include.  The other reason is because it gives people sometimes simplified notions of how the other gender is depicted in the stories, and sometimes that’s not for the best. 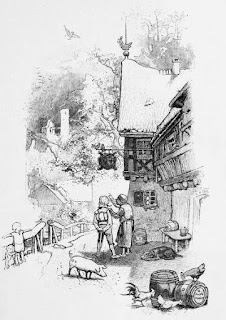 This brings us to the subject of Prince Charming.

Near as I can tell, the name Prince Charming stems originally from a character named Charming in Catherine D’Aulnoy’s story “Lovely Goldilocks”.  The name has then been taken and applied to any prince appearing in otherwise female-dominated stories like “Cinderella”, “Snow White” and “Sleeping Beauty”.  These princes are generally bit parts endowed with some deus ex machina ability and are generally just a reward for the much-suffering princess.  However, he’s also become most people’s vision of a male fairy tale lead.  As such, while people focused more on the princesses and changing those roles, the Prince Charming character has devolved into parody in the media.  In Into the Woods, there are two princes who are more interested and capable in chasing and rescuing damsels than what comes after.  In Shrek 2, he’s a vainglorious fop.  And in Fables, he’s a cad incapable of real romantic love.  So, why has this happened?  Well, I’m reminded of a scene in Disney’s Enchanted in which Prince Edward sits in front of a television asking it questions and asks “Tell me Magic Mirror, why is everything so difficult here?”  That’s the image we have of the fairy tale prince right now.  A character that used to be seen as an idealized knight errant and romantic ideal in less modern times is now seen as a character for whom everything is usually easy.  The female lead suffers from abusive step-families, curses and murderous huntsmen, but the male lead can waltz in and kiss a sleeping girl and his job is done.  He has the world on a platter.  For many, this is people’s vision of the male lead in the fairy tale.  However, that doesn’t mean it’s the best vision.

There are two Charming movies in the works.  One is a live action movie from Disney.  The other is an animated musical comedy from the people who made Shrek.  I don’t know much about them yet, but I’m betting on one or both of them being parodies.  I think before we can move forward in giving fairy tale fiction good male leads who are not Jack, the culture needs to get its head straight about its relationship with male leads in European fairy tales.  And before we can get things straight about male leads in European fairy tales and female leads in the Arabian Nights, the culture has to get its head right about gender marketing fairy tales in general.  After that, with luck and some magic, maybe things can become a little more balanced.
Posted by Adam Hoffman at 11:24 AM