Okay, so I’m about a week post-op and in recovery mode.  I now have an artificial aortic valve as well as a certain length of artery which has been replaced.  Now, I’m still in recovery and can’t guarantee a lot of other posts in the coming weeks.  However, I wanted to take some time to reflect on the idea of this surgery and what it does.  In essence, what it does is it takes part out of an existing yet flawed system and replacing it with something artificial.  It essentially renders the system fixed but no longer whole.  It’s one form of damage being replaced with another more efficient form of damage.  It could be enough to make anyone feel a bit broken.

I know.  This may seem like it’s getting a little heavy.  I’ll try to keep it light.

Now, there are any number of characters in popular culture who can be considered in connection with this.  There are various superheroes, for example.  There’s Marvel’s Iron Man, as well as DC’s Doom Patrol and Cyborg.  Speaking of cyborgs, we also can’t forget Marissa Meyer’s Cinder which takes the emotional scars of the classic Cinderella and makes them physical in the form of cybernetic parts.

However, what it has made me think of from the start is the Land of Oz, created by L. Frank Baum. 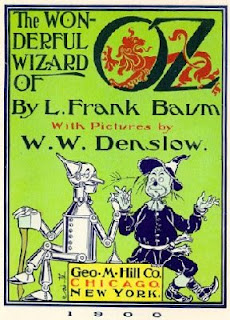 From the day The Wonderful Wizard of Oz was published in 1899, the book proved to be a phenomenon.  It spawned a series that included 14 books by the original author and countless others by his successors, as well as various films, toys, comic books and so forth.  The series was pretty much the Harry Potter of its day.

I’ve wanted to talk about the Oz books for a while, now.  However, I’ve never been quite sure of when to approach them.  There is a lot to talk about.  There’s the fact that Oz is arguably the most successful fantasy realm created by an American author.  There’s the fact that the Oz series of books was so successful that it extended way past the point where the author intended to end it, and was even continued by his successors.  There’s the fact that Oz has long seemed to be a largely feminist fantasy land.  There’s the way that the Oz books indicate the sliding scale of narrative darkness, being designed to be lighter than Grimm and Andersen, but still being darker than their most famous cinematic adaptation.  There’s even the way that L. Frank Baum’s books (Oz and others) presaged the unique qualities of another American art form, the superhero comic, by having crossovers.

However, the thing that I can’t stop thinking about in regards to Oz is how all the characters, or at least all the male characters, either lack something or think that they do.

This goes back to the very first of the books, too.  You know the one.  It was made into that MGM movie.  The viewpoint character, Dorothy Gale, is dropped into the world of Oz and starts on a journey to find her way home.  Along the way, she meets three characters who feel they lack something.  There’s a Scarecrow, who needs a brain.  There’s a Tin Woodman, who seeks a heart.  There’s also a Lion, who seeks courage.
All three of these characters have their own reasons for seeing this lack in themselves.  The Lion just seems to see the lack in himself all on his own.  Largely because he can’t seem to see the difference between being fearless and acting in spite of fear.  The Scarecrow took the words of others, namely a crow, too much to heart.  The most tragic of all is probably that of Nick Chopper, aka The Tin Woodman (my personal favorite).

In a back story that was a little too intense for the famed cinematic adaptation, Nick Chopper is a man who lived his life cutting trees as his father did before him.  Nick falls in love with a Munchkin woman and plans to marry her.  The old woman who keeps the Munchkin woman as a servant doesn’t want to give her up.  So, she contacts the Wicked Witch of the East who enchants Nick’s ax.  Every time he tries to chop a tree, the ax slips and chops off a piece of him which he has replaced with tin.  Eventually, he’s nothing but tin.  At this point, Nick has forgotten all about his Munchkin sweetheart and he’s come to the conclusion that it’s because the tinsmith forgot to make him a heart.

Now, getting past the fact that Baum actually managed to include this explanation in his whimsical children’s book, let’s think about this.  Nick Chopper was basically an accident victim.  Can we really blame him for feeling a bit numb and disconnected after all that?

All three of our heroes eventually find their way to the Emerald City and manage to get what they seek from the Wizard.  Or do they?  The Wizard himself is a con artist.  He practically fell into his role in the Emerald City.  So, to the Tin Woodman he gives a placebo heart, made of fabric stuffed with sawdust.  For the Scarecrow, he just fills his head with bran (wood shavings) and adds some pins to show how “sharp” he is.  And for the Lion, he pours an elixir that gives him some kind of “temporary courage” (I’m guessing it’s some kind of booze). 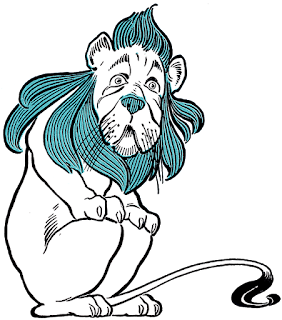 Now, this is pretty common knowledge for those who’ve read the first Oz book.  However, this collection of odd, flawed characters doesn’t end there.  They continue throughout the Oz books.  There are also characters like the mechanical man Tik Tok who can think, move and speak but will never really be alive (another character I relate to, seeing as my artificial valve does make a clicking sound sometimes).  There’s also the Very Hungry Tiger, who’s never satisfied with his food because he wants to eat small, helpless creatures but his conscience won’t let him.  Some characters are flawed but don’t see it like H.M. Wogglebug, T.E., who always brags about his education but doesn’t seem to realize that being educated and being smart aren’t the same thing.  There are those who see flaws in themselves that others don’t.  Like Ojo, the Munchkin boy who sees himself as unlucky while everyone else tells him how lucky he really is.  There are also those who embrace themselves regardless of what others think like Scraps, the Patchwork Girl of Oz who may be too free-spirited and poetic for anyone else in Oz to really stand, but who really doesn’t seem to give a fig. 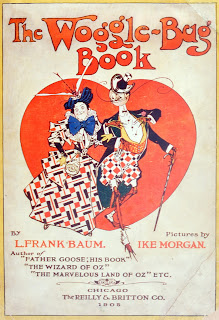 What’s interesting about all these characters is that we never really see their ails fixed, yet we’re still satisfied with how their story ends.  Why is this?  Well, there’s the most obvious one, which is taken as the lesson from the MGM movie: “they had it in them all along”.  The Lion was really brave, the Tin Woodman really big-hearted and the Scarecrow really wise.  Though, this is arguable.  Despite being so wise, the Scarecrow can still act pretty stupid sometimes.  However, we could also argue that as flawed, damaged or lacking these characters are, it doesn’t really matter in the end.  We love these characters not despite their faults and flaws, but because of them.  In other words, it’s okay to be a little bit broken.  Even with their flaws, they’re still some of the best people you can meet in the strange and wonderful Land of Oz.

So, that’s it for now.  I don’t know when you’ll be hearing from me again, but you will.  I just still have a fair bit of road ahead of me.
Posted by Adam Hoffman at 10:35 AM