First of all, before anyone asks, I’m recovering fine.  Thank you.

Anyway I thought, with the announcement of the Sword in the Stone remake, that I’d take a moment to touch on Disney’s new trend of revisiting their past animated works in live-action form.  Unfortunately, this will only have a little bit to do with fairy tales because contrary to popular belief, not all Disney animated films are fairy tales. 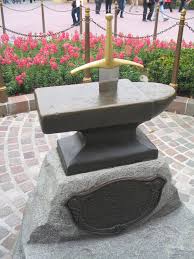 As many of you know, starting with Maleficent, Disney has been steadily releasing and announcing new live action features based on animated works they’ve done before (that’s right, I’m crediting Maleficent with the start of this, not Alice in Wonderland.  I’ll explain why in a little while).  The trend continued with the Kenneth Branagh directed Cinderella from last year (which I actually enjoyed).  However, since then they have announced new takes on:

1)Beauty and the Beast
2) The Jungle Book
3) Pinocchio
4) Dumbo
5) Winnie the Pooh
6) Pete’s Dragon
7) Mulan
8) Peter Pan (technically a Tinkerbell solo film)
9) Aladdin (a prequel about the Genie)
10) and finally The Sword in the Stone
(Note: this list does not include Disney’s Descendants, which is a TV movie and a mash-up)

Keep in mind, I think I may have missed one.  Reaction to these announcements has been mixed.  The loudest ones seem to be from people decrying the death of all creativity in Hollywood.  However, others seem to be having fun with it, making guesses and suggestions about what animated film they should tackle next.

Now, the thing to remember is that this isn’t exactly new ground for Disney.  All those animated films listed above were originally based on other sources (with the exception of maybe Pete’s Dragon).  On top of that, Disney has already made live action versions of their animated movies a couple of times before.  Am I the only one who remembers the other live action Jungle Book?  Or how about Glenn Close’s enjoyably manic turn as Cruella DeVil in the live action version of 101 Dalmatians?  Heck, they don’t even necessarily stick to adapting their own cartoons into live action.  Remember George of the Jungle or Inspector Gadget or Mister Magoo?

So, adaptations are not anything new to the Disney company.  This trend toward adapting a number of their own past animated works shouldn’t really surprise anyone.  Except for maybe being a surprise to Disney themselves.  You see, I’m not sure they were really intending on starting this as an ongoing trend.  Or, at least, I’m not sure they intended for it to start as early as people seem to think it has. So, while they planned (and continue to plan) a sequel, they decided to follow it up with another retake on a classic children’s fantasy book series.  That follow-up was  . . . Oz the Great and Powerful.

That’s where they seemed to be going at the start, there.  No specific Disney call-back, just revisiting old fantasy literature.  Oz is a franchise most usually associated with an MGM film which is now owned by Warner Bros.  Oz the Great and Powerful did not do so well at the box office, however.

Next, Disney took another approach and decided to draw from one of their animated films directly.  The twist being that they’d focus on the villainess as a misunderstood protagonist.  The result was Maleficent and Disney had another hit on its hands.  It’s probably around then that Disney realized that they had greater success when they revisited stuff they’ve done before.  I imagine this is also when the Disney script department started making a lot of calls to screenwriters. Disney is now indulging in its own nostalgia, but with a twist.  Cinderella was made into a Kenneth Branagh period film with more focus on the heroine herself.  Beauty and the Beast will be a musical.  Genies is going to be a prequel.  Every film seems like it’s going to be doing something a little different.  This makes a little bit of sense in this post-internet era when Disney nostalgia with reinterpretation is big.  Where and when else can you see stuff like “Disney Princesses as Raptors”.  So, why are the first responses to these movie announcements usually so negative if this is nothing new?  Well, my first instinct is to say “because this is the internet”.  However, it might also be because to many of the people who grew up watching Disney animated films, these movies are kind of sacred ground.  I mean, it’s considered okay to make ridiculous Disney fanart.  However, when Disney does it themselves, it has a sense of authority.  It might feel almost like they’re trying to correct or fix their past films.  That could cause some trepidation for those who loved those films growing up.

Do I care?  Not really.  I mean, this is the same company that reinterpreted Baloo the Bear as a cargo pilot and that worked out fine.  If anything, for me it’s review fodder.  I’ll be there for Beauty and the Beast and Genies with pad and paper in hand to take notes.  Heck, maybe I’ll even stretch my definition of fairy tale a bit and review Pinocchio and Tinkerbell.  The original movies will still be there and it won’t be the last time Disney reinterprets something.
Posted by Adam Hoffman at 12:49 PM