Jack: Y’know, as this time of year comes around and people start talking about ghosts and monsters, I can’t help but get upset by how you human types have made some self-respecting monsters into generic terms.  You forget all about the real roots of your folklore.


Adam: Now that’s something I can agree with!  Like how people Europeanize certain creatures!  Some book adaptations of “Momotaro” call the oni ogres.  Ogres are monsters of French origin, not Japanese.  What’s wrong with using the Japanese name for a Japanese monster?  Also, let’s not forget about how people forget the Scandanavian origins of trolls, or that they have a sort of lore all their own!  Like how they turn to stone in sunlight!  And then there’s the way that people lump all faeries together . . .


Jack: Yeah, yeah.  That’s all well and good.  But I’m here to talk about GHOULS! 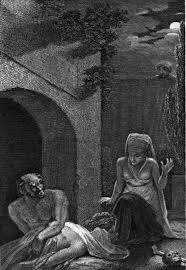 
Jack: Ghouls!  You know, ghouls!  Everyone this time of year talks about ghosts, goblins and ghouls but most of those people probably don’t even know what a ghoul is.


Jack: A ghoul, or ghul, comes from Arabain folklore.  A ghoul is a type of evil djinni.  You may have heard people say “genie”, but it’s actually “djinni”.  The djinn are the otherworldly spirits in Arabian cultures, like the faeries are in many European cultures.  They’re said to be beings made of smokeless fire.  Belief in the djinn predates Islam but that belief was so strong and popular that the djinn are actually mentioned in the Koran as creations of Allah.  Ghouls in particular are said to be djinn that are sired by Ibliss, the Muslim version of the Devil.


Jack: The word “ghul” likely stems from “al-ghul” which stems from the Arabic “ghala” or “to sieze”.  It’s also related to Gallu, which is the name of a Mesopotamian demon.  Now, in folklore (and among all the ones I know personally), ghouls dwell in graveyards, ruins, desert wildernesses and other uninhabited places.  They’ve been known to rob graves, lead travelers astray and abduct children all in the name of getting their favorite food: human flesh.


Jack: But, did you also know that ghouls have a tendency of stealing coins and drinking blood?  Or, did you know that they can change their form?  Usually into hyenas.  They can also take the form of the last human whose flesh they’ve eaten!  Also, ghouls are one of the go-to monsters of Arabic folklore.  They appear in a whole bunch of the Arabian Nights as well as a number of other sources.


Jack: The word “ghoul” can also just mean “demon”.  The star Algol is actually short for Ra's al ghul, which means “the demon’s head”.  It’s called that because it’s part of Medusa’s head in the constellation Perseus.  Also, bet you know this, being a colossal geek like you are.  Ra's al ghul is also the name of a Batman villain.


Jack: Oh, and George Romero used the word “ghoul” to describe the monsters in his movie Night of the Living Dead.


Adam: Enough!  The reason people probably don’t talk about that stuff is because they probably don’t want to play up stuff as morbid and disgusting as grave robbing and eating human flesh for a holiday usually marketed to children!


Next time: The conclusion of Jack O’Lantern’s Halloween takeover.
Posted by Adam Hoffman at 4:22 PM