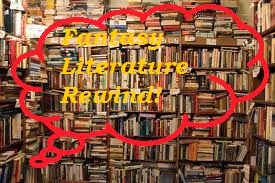 I know this statement may get under the skin of some folk tale purists, but here goes . . . literary stories have earned their place in the greater fairy tale scene.  I know, I know.  I go on about how many amazing unknown folk tales there are and now I talk about how great literary tales are.  But there’s a lot to be said for the literary fairy tale tradition.  In fact, some of our most well-known folk tales owe their existence to literary sources.  For example, as near as anyone can tell, “The Beauty and the Beast” started as a literary story and then went folk so to speak.  And if we don’t count literary tales, then we lose almost everything written by Hans Christien Andersen (I’m not a big Andersen fan myself, but what’s canon is canon).  I figure literary tales are okay, as long as we acknowledge where they came from.  That’s what Fantasy Literature Rewind is about.  Looking at the classics (and some underrated gems) of fantastic or fairy tale literature and reexamining them and taking another look at the stuff that we don’t remember so well.  So, I thought I’d start this feature off with one of my favorites that many people only know by name without knowing the real story . . .

The Adventures of Pinocchio by this man:


Carlo Collodi.  Collodi is probably one of the great literary badasses in children’s fiction.  Collodi was born Carlo Lorenzini in in 1826.  He was the son of two servants to the Marquis Lorenzo Ginori and had nine brothers and sisters of which only two would survive childhood.  If not for the Marquis’s help, young Carlo Lorenzini would likely have never received an education.  During his life, Collodi would be a civil servant, editor, playwright, satirist and would join military campaigns to fight for ’s independence from the Austrians twice.  He would start more than one literary magazine, one of which was banned by Austrian authorities for being too subversive.  Yet, strangely, it wasn’t until he was asked in 1881 to submit stories to a magazine for children that he made his name to the greater world.  Of course, it was the stories about Pinocchio that were the result.


Now, if you’re expecting a sentimental tale like the one in the acclaimed movie made by those Mouse-Ears people, boy are you in the wrong place! 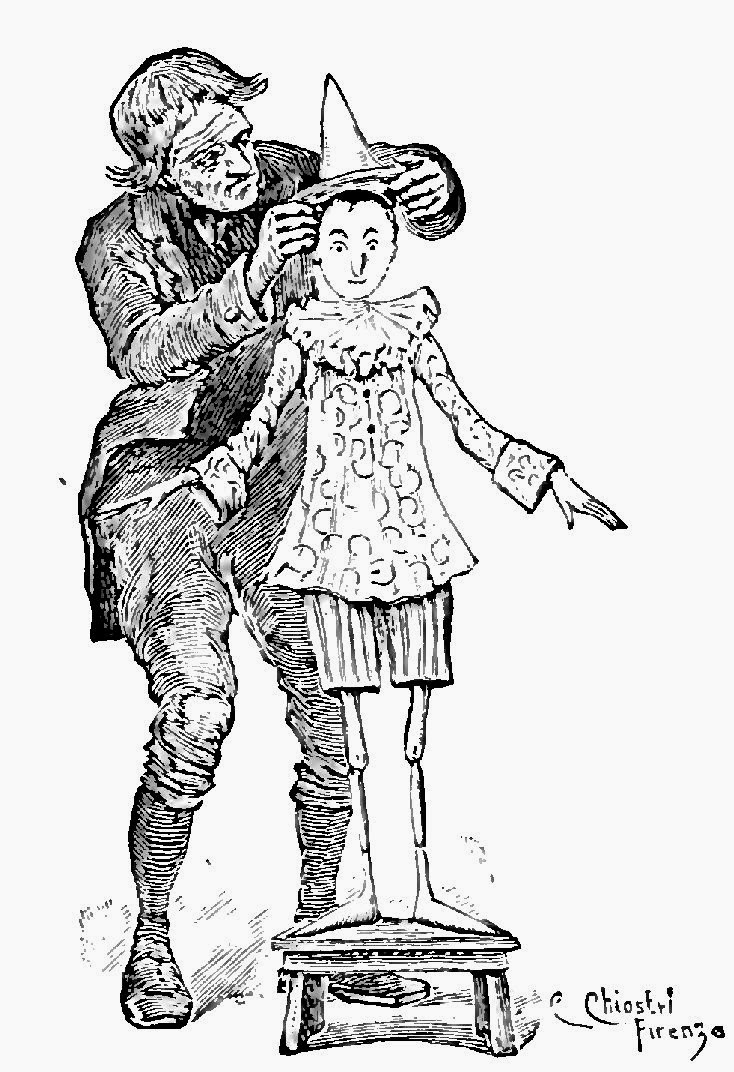 The story starts not with a wish but with a simple piece of wood.  This piece of wood lies in the workshop of a carpenter called Mr. Cherry.  Now, Mr. Cherry sees this piece of wood and decides to make a leg for his table.  Now, as he begins to strip off the bark, the wood speaks to him and asks to not be struck so hard!  This surprises Mr. Cherry and he tries to find out who’s speaking to him in a variety of rather amusing ways.  Then, discovering nothing, he goes back to work planing the wood, at which point the wood complains of being tickled.  Mr. Cherry is so surprised he passes out.  Anyway, after Mr. Cherry revives, who should come along but his old friend Geppetto.  You may recognize the name, but this Geppetto is a little different.  This Geppetto is known to be kind of a hothead.  He wears a yellow wig that’s the same color as polenta.  So, children would tease him and call him “Polendina”.  And every time they call him that, he flies into a rage.  Naturally, this does not give him a great reputation with children.  Anyway, Geppetto’s come to get some wood to build a puppet that will dance and fence and turn somersaults so he can take to the road and earn some cash.  Now, remember that talking piece of wood?  Mr. Cherry and Geppetto are talking, the wood decides to pipe in and makes the mistake of calling Geppetto “Polendina”.  Geppetto accuses Cherry.  Cherry denies it.  When the dust clears, the two gentlemen make up and Geppetto leaves with the talking piece of wood.  He then carves it into a puppet that proceeds to kick Geppetto in the nose, snatch his wig off of his head and run away as soon as it figures out how.


You may have noticed that this Pinocchio is less than a model citizen.


Now, I don’t want to call Pinocchio bad exactly.  I mean, he’s certainly not the most troublesome puppet to rise out of Italian culture.  For example, there’s our friend Mr. Punch here (now that guy's a little psycho.  Don't believe me, look it up).

He’s certainly not setting out to hurt anyone.  However, he’s hardly obedient.  You might even say he’s a brat.  In terms of impulse control, he seems to rank somewhere along the same lines as Bart Simpson and Bart Allen (check the links if you don’t get the references and the following pictures for visuals). 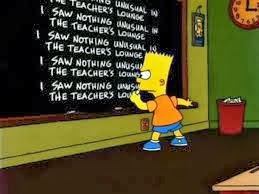 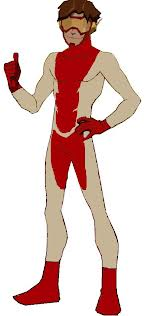 Pinocchio wants what he wants when he wants it and all he wants is to (and I’m paraphrasing from the text) eat, sleep, drink, amuse himself and lead a vagabond life from morning to night.  Not everyone he meets comes out of the encounter whole.  At one point early on he gets lectured by a talking cricket.  Pinocchio gets so angry when the cricket mocks his wooden head that he throws a mallet at the cricket and kills him.  Yeah . . . I know.  That part upsets some people who really like that movie version.  But let’s remember that crickets usually don’t look like little men with top hats and umbrellas.  They usually look like this:

I’m a great lover of insects myself, having watched and collected them as a kid.  However, even I can only get so worked up about someone squishing a bug.


This tendency to cause trouble is the cause of Pinocchio’s many adventures.  As he follows one impulse after another, he winds up in scrape after scrape with the repercussions of his actions becoming more over-the-top every time (repercussions that he largely ignores or chooses not to think about).  It’s a moral tale about the “civilizing” of a naughty child (or rather a wooden puppet with minimal impulse control and the attention span of a sea cucumber).  However, for all the moralizing, it’s also a wildly inventive story.  Collodi’s imagination must have worked on overdrive in creating this book.  At different points in the stories, Pinocchio gets swindled by a fox and cat, gets hung from a tree and left for dead, nearly gets turned into a donkey, is almost fried and eaten like a fish by a green fisherman, spends four months in prison, encounters a giant serpent, gets turned into a farmer’s watchdog, meets a bunch of fellow living puppets owned by a man named Fire-eater and towards the end gets swallowed by a giant shark!  Not a whale but a giant shark!  I’m imagining something roughly megalodon sized.

Anyway, those are just some of the highlights.  If you’re interested in checking out the real story of Pinocchio, wooden trouble-maker that he was, you’re in for a crazy story filled with over-the-top creatures and characters.  It’s a little less shiny and polished than the celluloid version with a protagonist with more than his share of flaws.  Yet, I think it’s still a tale worth seeking out.  That’s no lie!
[Pictures courtesy of fr.wikipedia.org, commons.wikimedia.org, en.wikipedia.org, www.flickr.com, bat-family.deviantart.com and de.wikipedia.org]
Posted by Adam Hoffman at 5:38 PM