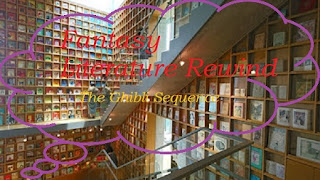 Okay, so this took a little while, didn't it? The arrival of the last of my posts about the books (or at least some of them) adapted by Japanese anime powerhouse Studio Ghibli. But the way this book was adapted was a unique case. The fact that it was a unique case was also to some extent what made this episode take so long. But I'm getting ahead of myself.

First thing's first: you must meet the book we're talking about.

Ronia, The Robber's Daughter is a 1981 children's novel by Swedish author Astrid Lindgren. This being the same Astrid Lindgren who created the character of Pippi Longstocking, among others. The book has been adapted into a prize-winning film, Danish and German musicals and has been translated into at least 39 languages.

The book is about Ronia, the daughter of a short-tempered robber chieftain names Matt. Ronia was born the same night as a great storm that caused a lightning bolt to split Matt's fortress in two. Ronia grows up among the robbers, but after a certain age feels more at home in the forest where live wild beasts like bears and foxes but also fantastical creatures like wild harpies, grey dwarves and the unearthly ones. Things begin to change for Ronia when the clan of Matt's rival Borka sneak into the other side of Matt's fortress and set up house, including Borka's son Birk. Then they change even more as Ronia and Birk bond in the forest after Birk stops Ronia from being led astray by the unearthly ones. With Matt and Borka's rivalry rapidly threatening to boil over into violence, Ronia soon finds herself called upon to make some difficult choices.

It's an interesting book. One thing that struck me is how low-key the fantastical elements are. They're there and they play an important part in certain scenes, but the book isn't given over to them. One imagines that if given another rewrite, this whole book might have changed from fantasy fiction to a vaguely historical novel. The “robber” part also serves to mainly add an additional source of conflict. Ronia herself isn't a robber. Neither is Birk. Just their fathers and the people around them are. Ronia actually makes a big deal about not wanting to be a robber. A large chunk of the book is actually given over to Ronia and later Ronia and Birk hanging out in the forest doing things and figuring out life as they go. Not to say there isn't any tension or big events. It's just hard to talk about them without spoiling them. I will say that there's one sequence of events that leads to both Ronia and Birk having falling outs with their fathers that gets really intense and is a huge turning point midway through the book.

The anime series from Studio Ghibli, strangely enough, both a whole other thing and not all that different at all.

Ronja, The Robber's Daughter (notice the J instead of I in Ronia's name. Not sure if that's a major difference, but it is important when searching for this stuff online) was a 2014-2015 cel-shaded, computer-animated anime series co-produced by Polygon Pictures, Studio Ghibli, NHK Enterprises and Dwango.

It's the first animated TV series from Studio Ghibli. I should point out that Ghibli making a TV series is kind of a big deal. Not just because it's Ghibli and they're super popular. But because it's generally a big deal for animation studios that deal largely with theatrical animation to move into the world of television animation with its tighter time constraints and budgets. Doing TV is a risk for a studio that's used to putting out a product with a certain benchmark of quality. It's what kept Disney out of the TV animation game until the '80s when CEO Michael Eisner and company managed to make it work, which led to shows like Gummi Bears, Duck Tales, etc.

So, this show is something completely new and different for Studio Ghibli. They've never made an animated television show before. However, it is also amazingly faithful to the book. More faithful than many of their movie adaptations of books. Unlike some of the Miyazaki films, this show does not seem to have anyone bending it toward certain themes they want to tackle. It follows the sequence of events from the book pretty closely but adds in a few things to take better advantage of the visual nature of the show. For example, in the book we're told that Matt and Borka and their respective bands are robbers, but we never actually see a robbery take place. The TV series opens with one. And as an artistic flourish, it appears Matt and his gang all wear ornate monster masks when robbing someone.

Really, it is a remarkably faithful series. There are some places I could nitpick or which made me scratch my head. For example, Matt's name became Mattis in the show. I'm not sure if that's a deliberate change or the result of translation. Also, though Ronja is supposed to grow from a baby to a young girl of 12 in the series, she doesn't seem to physically grow all that much. I mean, she starts as a baby and then is maybe supposed to be 6 when she first goes into the forest, and then 12 at the end. But 6-year old Ronja and 12 year old Ronja look a little too similar. I wish they could have varied their designs of the main character a little more over the course of the series. Also, there's the character of Noddle Pete. Noddle Pete is an old man and the oldest member of Matt/Mattis's band. The show seems to suggest more at the very end that Noddle Pete is Ronja's actual grandfather rather than just a grandfatherly figure. This is mainly because there's a flashback to Noddle Pete rushing home when Mattis was born the same way Mattis ran home when Ronja was born. I'm not sure if that's what the animation writers intended or not.

Overall, it's just a rather well done series. It kind of reminds me of some of the “gentler” animated fantasy series for kids that used to air on cable back in the day. Stuff like David the Gnome or my beloved Grimm's Fairy Tale Classics. (Note: Yes, I know it's odd to describe shows with fairy tale elements as “gentler” but the point I'm trying to make is that they're not action shows or epic fantasy shows).

The book is available from a number of book purveyors (though, not the Kindle Store the last time I checked) and the show is on Amazon Instant Video and has been released on blu-ray by Gkids and Shout! Factory. Check 'em out if you're interested.

And that wraps up Fantasy Literature Rewind: The Ghibli Sequence. Stay tuned, though. There are more good things to come.