Once Upon a Pixel: Okami pt. 1 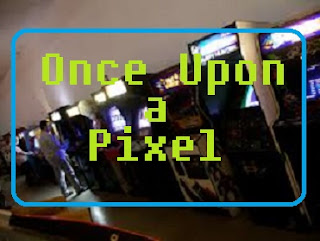 Hey, everybody!  If anyone’s been paying attention to my social media presence, you may know that I have been absolutely hooked on playing a game called Okami.  Now, this game came out years ago for the Wii and other systems of the day.  However, it was just recently rereleased on the Nintendo Switch virtual console as Okami HD.  It’s a great adventure game with fun gameplay, a unique art style and an interesting game mechanic involving a “celestial brush”.  You want to know the best part, though?  This game is absolutely filled with references to Japanese history, art and culture.  And of course that includes Japanese folk and fairy tales. 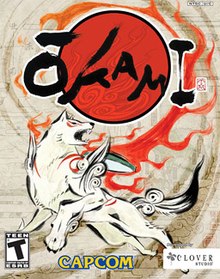 I thought I’d go over a few of the tales referenced and how they manifest themselves in Okami.  The title of each will be a link connecting you to the actual story.  First though, we should start with the story that starts things off, one that’s more myth than folk tale. 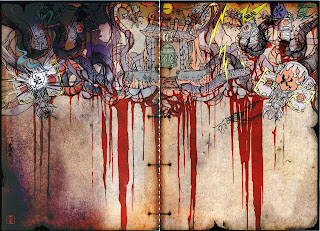 In Shinto myth, the god Susano-o was kicked out of the dwelling place of the gods, Takamagahara, by his sister the great sun goddess Amaterasu.  When he ended up on Earth, he was near a river where he saw some chopsticks floating downstream.  Figuring that meant someone lived upstream, he followed the river until he found an elderly couple and their daughter Kushinada-hime who were very distraught.  They explained that Kushinada-hime was to be sacrificed to a monstrous serpent with eight heads and eight tails named Yamato-no-Orochi.  The couple had eight daughters and every year Yamata-no-Orochi came for one until Kushinada-hime was the only one left.  Susano-o tells the couple that if they’ll grant him Kushinada-hime’s hand in marriage, he will save her.  They agree.  Susano-o’s plan is a bit unique, involving Kushinada-hime being transformed into a comb and lots of very strong sake.  But it ends with Susano-o finding one of the Three Imperial Treasures of Japan (what?  I’m not giving the whole story away.  Like I said, click the link above).

The whole first part of Okami is based on this myth.  There are some differences, though.  In this case, Orochi was an evil that had been defeated before and been sealed away.  Generations ago, Orochi plagued the land, firing an arrow into the home of any woman he wanted sacrificed to him.  He was eventually defeated by a warrior named Nagi and a white wolf named Shiranui.  Now, the creature is released from the place where it was held so it may terrorize the countryside again.  There’s still a Susano-o figure though.  Susano is a descendant of Nagi in this game.  He’s also a bit of a stubborn buffoon, albeit an earnest one.  Kushi is the Kushinada-hime character, a young woman who brews sake in Kamiki Village (if you see her design, you’ll notice that her hair is distinctly comb-shaped).  As for Amaterasu?  That’s the player character.  Yeah, that’s right.  The main character in this game is the goddess of the sun, mother of all, in the form of a wolf. 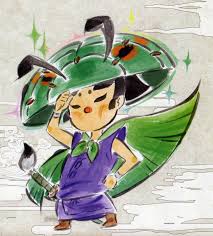 “Issun-Boshi” is a story I’ve covered before on the blog here.  It’s sort of like a Japanese “Tom Thumb”.  A childless couple pray for a child only to have one born to them that is incredibly small.  The child grows older but not much bigger, and decides to go off and earn his fortune.  Taking a sewing needle as a sword, Issun-Boshi sails a rice bowl down to the city and gets a position as the personal attendant of a rich man’s daughter.  One day on the way to the temple, the daughter and Issun-Boshi are ambushed by an oni who swallows Issun-Boshi.  Issun-Boshi causes so much trouble in the monster’s guts that he throws him up and takes off, leaving his magic mallet behind.  The rich man’s daughter then uses the mallet to enlarge Issun-Boshi to full human size.

That actually is pretty much the whole story, but I needed to lay it all out to talk about all the references in the game.  From pretty much the beginning of the game, Amaterasu is given a companion to act as a dialogue proxy and also comic relief.  A tiny little guy referred to as “Wandering Artist Issun”.  And Issun is . . . well . . . kind of a pain in the ass, actually.  He’s loud and opinionated.  He’s boastful.  He scolds you if you screw up a challenge.  He also hits on pretty much every woman you meet in the course of the adventure.  But he does have a few uses.  At one point you have to sneak into the Emperor’s palace.  The only way to do that is to use a magic mallet to do the opposite of what it does in the story.  You shrink down to about Issun’s size and creep into the courtyard through a chink in the wall.  At that point, Issun becomes the expert on how to survive at bug size.  In another reference, Issun and Amaterasu do end up having to go into someone’s body.  The difference is that it’s not an oni this time, it’s the emperor. 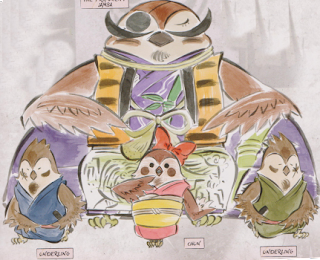 “The Tongue-Cut Sparrow” is a story about a kind old woodcutter and his pet sparrow.  The woodcutter is married to an old woman who is greedy and cruel who hates the sparrow.  One day, after the sparrow ate the rice paste that she was going to use to starch her clothes, the old woman gets angry and cuts the tongue out of the sparrow’s beak (cruel as it is, I’m amazed at the old woman’s precision in doing that).  The sparrow flies away.  Later, the woodcutter finds the sparrow again in the woods and finds out that not only is the sparrow well with a newly restored tongue but that she’s actually a magical creature.  The woodcutter is welcomed into the sparrow’s home where he is entertained all evening.  He leaves the next morning with a choice of two boxes to take away as gifts, one big and small.  He chooses the smaller one.  When the woodcutter’s wife discovers he left behind the bigger box, she goes to the sparrow’s home to get it.  She later discovers that may not have been such a good idea.

During the first part of the game, you may discover two different places.  One is a cottage with a palpable aura of evil around it and a rather creepy and dangerous old lady out front.  The other is a place called Sasa Sanctuary, an inn and hot spring resort run by giant sparrows.  You find out in short order that the youngest daughter of the Sparrow Clan is being held by the old woman and her husband.  Using a certain set of circumstances, Amaterasu is able to enter the house and reveal the old couple’s true forms as a pair of Crow Tengu.  After defeating them, the young sparrow is freed and you get access to all of Sasa Sanctuary which is very helpful in game.  So, it’s a little different.  This time, not only is the old woman awful, she’s an actual monster.  As is her husband, who is not the kind woodcutter of the tale.  However, there is a guest at the Sasa Sanctuary inn who comments that he helped a sparrow once and that he felt their hospitality was him being repaid for it.  And that word is probably the biggest connection for the sparrows themselves: hospitality.  It may not be a simple home in the woods, but the inn at Sasa Sanctuary is an amped up expression of the hospitality that the sparrow showed the woodcutter in the folk tale. 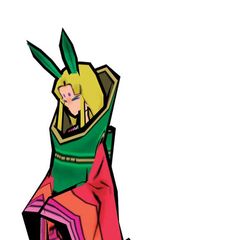 The story of “The Bamboo Cutter” is a rather magical and touching story about a bamboo cutter who finds a tiny little girl inside a stalk of bamboo and raises her as his own.  As the girl, Kaguya,  grew older and became more beautiful, suitors pursued her but she wanted nothing to do with them.  Until the time came when she had to leave and go back to the Moon Kingdom where she was originally from.  If you’ve seen the Studio Ghibli film The Tale of the Princess Kaguya, then you know what story I’m talking about.  Also, the Australian Fairy Tale Society had been focusing on this tale just recently.

Through the first part of the game, you’ll run into a man named Mr. Bamboo frequently.  Mr. Bamboo is a craftsman who makes things out of, you guessed it, bamboo.  In many of your encounters with Mr. Bamboo, you’ll be in situations in which you’ll have to cut open a glowing stalk of bamboo.  This is a direct callback to how the Bamboo Cutter found Kaguya and the treasures sent down by the Moon Kingdom.  A little while later you meet the in-game version of Kaguya, who is Mr. Bamboo’s adoptive granddaughter, in the emperor’s palace where she’s being held against her will.  This is another callback, this time to the part in the tale when the emperor tried to marry Kaguya himself.  Amaterasu and Issun free her only to assist her later in the bamboo grove behind Sasa Sanctuary to dig up . . . a giant bamboo-shaped rocket.  Hey, I didn’t say these were completely serious takes on these tales.  It is a rather unique take on the tale’s Kaguya-hime and her origins on the moon.  Another interesting thing you might notice is Kaguya’s design.  The bamboo part is obvious, but did you notice the little “rabbit ear” like protrusions on her head.  This also alludes to her origins on the moon.  In China and Japan, rabbits are associated with the moon because of a pareidolia (the psychological phenomenon of interpreting a pattern where none exists) that sees the shape of a rabbit using a mortar and pestle on the moon’s surface.  Where Americans see the face of “the man in the moon”, the Japanese see a rabbit (see also Sailor Moon aka Usagi, whose long pigtails make her look kind of like a lop-eared rabbit).

I’m not even done yet.  This one’s going to have to be a two-parter.  Keep an eye out for the second half where I highlight four more stories that make cameo appearances in Okami.
Posted by Adam Hoffman at 6:50 AM