When You Wish Upon a Remake.

So, it seems that for the immediate future, Disney’s stroll through its back catalog has taken a break.  With Beauty and the Beast having come out in March, our big Disney movie for 2017 has come and gone.  That doesn’t mean things aren’t in the works, though.  A number of other Disney fantasy movies are in various stages of pre-production.  One specific bit of news though is that Disney is apparently courting Skyfall director Sam Mendes to direct the live action iteration of their film Pinocchio.

Ah, Pinocchio.  The book by Carlo Collodi has become an unexpected favorite of mine.  The book is darkly hilarious and crazily creative in an almost random way.  Despite being rather didactic, I find it very entertaining.  Disney’s animated movie on the other hand . . .

Not gonna lie.  It’s not my favorite (though, that didn’t stop me from buying a copy of the recent DVD release.  Why?  Because I’m a sucker, I guess).  Truth be told, when it first came out it was hardly anyone’s favorite.  While Snow White and the Seven Dwarfs was a big hit, Disney initially lost money on Pinocchio, and Fantasia.  Crowds just weren’t digging the different stuff they were trying in those films and only managed to recoup their losses with Dumbo.  Mind you, this is before they started a line of theme parks and essentially gave themselves a license to print money. 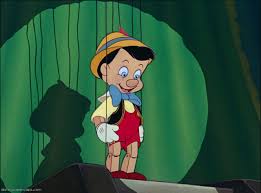 So yeah, this film is likely going to happen even if it isn’t with Mendes at the helm.  The news that he was in the running was enough for pop culture website The Nerdist to do a fan casting.  I’m not as interested in casts as I am in stories, though.  And the thing that interests me about the Disney remakes is that almost every one of them has used something from earlier versions of the story that was not present in the animated films.  There was the reference to the hazel branch from Grimm and the lizard footmen from Perrault in Disney’s Cinderella.  There was the myth about the elephants creating the jungle in The Jungle Book.  Let’s not forget the theft of the rose from Beauty and the Beast.  Even if it was a small detail, I appreciated it.

But now the question becomes: What extra bit of the source material could make its way into Pinocchio?

Well, I’m going to create my own wish list, but first let’s set some reasonable expectations with Things that will be in the Pinocchio remake whether I like them or not!

The “Wish Upon a Star” scene.  Yes, it’s amazingly maudlin and it takes away some of the humor present in the story with Pinocchio being a sentient log.  But that scene and the song that accompany it are iconic Disney.  So iconic that the song gets used for things that aren’t even Pinocchio-related.  It’s not my favorite addition to the story.  It actually plays into my theory that the darker a story was, the more Walt and company made it sappy and sentimental.  But I will patiently wait through this kind of syrupy sweetness for the sake of the dyed-in-the-wool Disney fans.

Jiminy Cricket’s co-starring role.  People just love that bug.  If you watch that movie again, you’ll notice he’s not a very good conscience, but people still love him.  They love him so much that people look at me in shock and horror when I tell them that Pinocchio squishes the Talking Cricket out of anger in the book.  It doesn’t even get better when I tell them he comes back with no explanation later in the book (#Pinocchiologic).  People even loved Jiminy back when the movie was bombing at the box office.  That’s why Disney brought him back as a presenter for some of their featurettes and shorts later on.  So, you can bet that Pinocchio’s rather flawed insectoid conscience will be back for the remake.

The Scary Donkey Scene.  In the book, Lampwick’s complete transformation into a Donkey and Pinocchio’s partial transformation into one were played more for laughs.  There was this whole scene where they both try to hide their donkey ears from each other.  Yet, ask almost any Disney fan and they’ll tell you that Lampwick’s transformation into a donkey is one of the most traumatizing scenes in the Disney canon.  And it’s often the scarier scenes that people remember best from Disney movies.  Perhaps because they’re so rare.  So, I can’t see this scene changing for the remake.

Monstro the Whale.  Honestly, I just can’t see them changing the whale back into a giant dogfish.  I just can’t imagine that happening.  It’s another one of those iconic Disney things.

Now that that’s out of the way, let’s make a new list!  Here we have The Fairy Tale Geek’s wishlist of things to be brought into the new Pinocchio remake.

Pinocchio’s and Geppetto’s Personalities.  When we get right down to it, both Pinocchio and Geppetto had kind of bland personalities in the Disney movie.  Geppetto was just a kindly old man and Pinocchio was just innocent and naïve.  The book was a different matter.  Geppetto was a hothead and Pinocchio was a pleasure-seeking child who had to learn to behave the hard way.  I think making the characters more like their literary counterparts here would actually deepen the relationships and show them with more complexity.  It would be nice to see Geppetto actually have to make the effort of controlling his temper around Pinocchio.  Meanwhile, Pinocchio would be a little bit more like a real child who has to find out that he can’t always get what he wants and will have to deal with being told “No.”

An Expanded Role for the Blue Fairy.  In Disney’s movie, the Blue Fairy is a magical benefactress.  She brings Pinocchio to life and lays out the conditions for him to become a real boy.  She doesn’t appear much after that.  In the book, she doesn’t bring Pinocchio to life.  He’s already alive even before being carved.  But she does have a bigger role.  She saves Pinocchio from certain death when he gets hung from a tree.  Pinocchio also stays with her at one point and even considers her his mother.  I know that movies are limited in length, but that’s something I’d like to see.  It’s so rare that you see Pinocchio depicted as having any kind of mother figure.  Besides, in 2017 it seems like a good idea to give a bigger role to one of the few female characters in the story.

The General Weirdness.  To tell the truth, despite some of the more fantastical parts, Walt and company really grounded the heck out of the movie.  Just having magic as an explanation for Pinocchio being alive did a lot of it.  As I said before, that part is probably not going to change.  In general though, the book was like a Wonderland story if Wonderland looked an awful lot like 19th Century Tuscany.  Maybe with less wordplay than a Lewis Carroll story (not sure, it could have been lost in the translation) but almost as much randomness.  But I would love to see more of that stuff.  Maybe the Green Fisherman could make it into this version.  Or maybe the animal-populated town of Fool’s Trap.  Or maybe we could see the Blue Fairy’s snail servant and coach drawn by white mice.  It would just be nice to see some of the surrealness brought back into Pinocchio’s world.

The Great Puppet Theater.  This one’s the ultimate long shot because it would mean changing an existing scene from the original film.  But I would like to see a more book-accurate version of the Great Puppet Theater.  In the book, Pinocchio sells his school book to see the puppet show and there he meets some other living puppets and is nearly thrown into the fire by the showman who’s named Fire-Eater (or Mangiafuoco in Italian).  In the movie, Pinocchio is tricked into joining the puppet theater by Honest John (the Fox) and Gideon (the Cat) and ends up being held captive by the puppeteer Stromboli.  None of the other puppets are alive.  Now, like I said, they’re probably not going to change the “wish upon a star” origin story.  Still, it would be great to see Pinocchio meet other living puppets.  It would have to be recontextualized for Pinocchio’s Disney origin, though.  Perhaps they’re other puppets who’ve been brought to life by fairy magic and never figured out how to be “brave, truthful and unselfish” so never won the chance to be real.  Maybe they’ve been living puppets who’ve been like that for nearly a hundred years and could serve as a bit of a warning for Pinocchio that he needs to try harder to be good.  Of course, they’d also have to try something different with the “I’ve Got No Strings” song.  This time, I imagine it being sung by the other living puppets as Pinocchio watches in the audience. 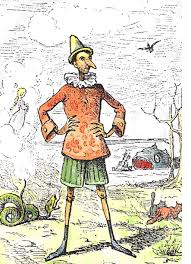 So, that’s my wish list.  Even if Disney doesn’t make any great changes for the remake, there will still be some Pinocchio options out there.  Last I heard, there’s still a Pinocchio movie in the works at Warner Bros. with Robert Downey Jr. and Ron Howard attached.  Also, Italian director Mateo Garrone is working on a version of the story.  But I’d like to hear from my readers about what they’d like to see added or changed during the Mouse’s continued walk down memory lane.  What stories would you like to see with some of their literary counterparts added or what could be changed to make the movie just better in general.  Personally, I’ve also got some suggestions for both The Sword in the Stone and Peter Pan but those are best saved for another day.  So, here’s the list of upcoming movies from InkGypsy’s blog.  Let’s hear what you’d like to see Disney’s second chance with these stories.
Posted by Adam Hoffman at 2:29 PM