Beauties and Beasts in Different Places with Different Faces.


Alas, my friends, Beauty and the Beast Month is coming to a close.  And there are so many other places I could have taken this because there are so many other takes on “Beauty and the Beast”.  I still haven’t touched on the ‘80s soap opera version starring Ron Perlman and Linda Hamilton.  Nor have I reviewed the low-budget Cannon Films version (which I actually own on DVD).  Or Alex Flinn's Beastly, either in book or film form.  But I thought that in order to wind up the month, I should really go back to the story itself and its many variants.  “Beauty and the Beast” is one of those stories that has wound itself in and out of both folk and literary culture.  The most standard versions may have been purposefully written by certain upper-class French women, but that didn’t stop the story from travelling elsewhere.  So, with the help of D.L. Ashliman’s Folktexts site and my own experience, I decided to do a bit of a literature review and pick five noteworthy versions and post some thoughts on them.  Note that this isn’t a “Top Seven”.  There’s no ranking involved. 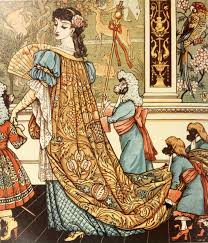 )      “The Springing, Singing Lark” (Germany)
This one is a Grimm story from their rather sizable collection of German folk tales.  The story starts out like “Beauty and the Beast”, with the merchant going off on business and asking his daughters what they want him to bring back.  In this case, the youngest doesn’t ask for a rose but for a “springing, singing lark” (hence the title of the story).  He then finds out that the lark belongs to a lion who threatens to eat him if he doesn’t bring him the first thing to meet him when he gets home.  But after that part, the story takes certain turns that turn it into a completely different type of fairy tale.  That’s the thing that I find so noteworthy about this tale.  The interesting thing about this story is that it uses what I like to call “modular storytelling”.  It’s something that can be used in fairy tales but very few other types of stories.  You see, in certain situations, you can take different fairy tale motifs and fit them together as sort of “storytelling Legos” to form other stories.  “The Springing, Singing Lark” starts off as a “Beauty and the Beast” type of story and then turns into a completely different sort of Animal Bridegroom tale that’s more like “East of the Sun, West of the Moon” in which the heroine has to search for her beloved.  Then, when that’s over it turns into a “True Bride” tale.  And all of it really does work together.

2    “The Singing Rose” (Austria)
This one is interesting because the “Beauty” herself is the one who goes searching for the rose.  It starts with a king telling his three daughters that his successor will be whichever of them can bring him back a singing rose.  So, right away we have young women embarking on adventures and potentially being placed in a position of power without having to marry into it.  A pretty refreshing start for a European tale.  The youngest princess eventually finds the singing rose in a castle garden deep in a pine forest.  However, in order to get the singing rose, she has to make a deal with the master of the castle who is an old man with a long grey beard.  The deal is that in seven years he will come take her away to live there in his castle with him.  So, it happens just this way with the Beast part being played by the old man.  But the princess’s stay in the castle is punctuated by slightly different events with different conditions attached to them.  Also, the ending is different from any “Beauty and the Beast” type of tale I’ve seen before.

“Beauty and the Horse” (Denmark)
This Danish story sticks out because of just what animal the beast is.  There are many different animals taking the Beast role in these stories.  There are bears and frogs and dogs and serpents.  One story even made a point of noting that the dog in question was a poodle.  But this one I think takes the cake.  The Beast is a horse.  It doesn’t specify if it’s a wild horse or a tame horse.  Or even what color the horse is.  I’m not going to lie, I had thoughts of both Mr. Ed and Nell’s relationship with Dudley’s horse in the Dudley Do-Right cartoons while reading this story.  The rest of the story follows most of the “Beauty and the Beast” motifs with some slight tweaks to them.  But it just sticks out because the Beast is a horse . . . of course, of course.

“The Fairy Serpent” (China)
By now, people should know that I have a soft spot for tales from China and Japan.  I can’t explain it too much, seeing as I’ve never been to either country.  Maybe it’s some of my otaku tendencies shining through.  Anyway, this follows many of the same “Beauty and the Beast” motifs with certain tweaks.  The father in this case was not asked to pick any flowers but sought them out himself so his daughters could use them as patterns for their embroidery.  Also, the serpent who plays the Beast here seems more upset about the trespassing than any theft (Huh.  Kind of like the Beast in the animated movie).  Also, all three daughters are offered the option of being the serpent’s bride.  Another interesting thing is that the family kind of drags its feet in bringing the youngest daughter to the serpent, so that the serpent has to send a swarm of wasps to convince them.  There’s more to it, but I won’t list it all here.  It’s just interesting that these motifs and archetypes extend that far beyond Europe.

“A Rosy Story” (Scoharie, New York)
This is my own contribution and a story that you’re not going to find on the internet.  I may have mentioned this in another post before.  It comes from an old book entitled Folk Lore of the Scoharie Hills that I found in the local history section of a local library.  For those who don’t know, Scoharie is part of Upstate New York (in other words, my own stomping grounds).  The interesting thing about this story other than its location and seeming rarity is that it splits the Beast’s role in two.  The being that demands the merchant’s daughter return to the house/castle is depicted as a ghostly headless man who confronts the merchant when he steals the rose.  However, the cursed prince himself is depicted as a giant toad who acts as a servant in the castle.  If the two characters were meant to be one and the same, it’s never stated in the story.  But then, the story itself was pretty rough in the form I found it.  I had to polish it a good deal before I made it into a decent storytelling performance.

This ends Beauty and the Beast Month, but I’ve got some more big stuff planned so stay tuned.