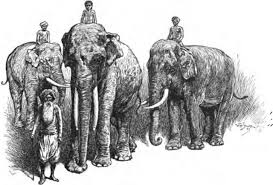 Hey, everybody!  I know it's strange for me to put up another post so soon after the last one, but I thought it would be a good idea to revisit this one because I could stand to give it a little bit of an update.  You see, me and Kristin from Tales of Faerie have been talking about the new Disney version of The Jungle Book in the comments section of my last post about these books.  You can read it HERE.

Anyway, the thing is that Kristin had mentioned that she at first thought it was strange that Mowgli didn't go to the man-village at the end of the movie but then she remembered that I said that Mowgli doesn't go back to the man-village in the book.  Well, here's the thing.  I hadn't quite finished both Jungle Books when I posted that.  I had finished The Jungle Book but I was still working through The Second Jungle Book when I posted that.  But I wanted the post to be up so it could coincide with the movie because I knew it would be on people's minds at the time.

Here's the thing.  Mowgli does end up back at the village at the end of The Second Jungle Book.  Not the same one that drove him out because he had the jungle take that one back, but definitely a man-village.  In a story called "The Spring Running", a grown-up Mowgli finds himself restless and annoyed that the animals that have sworn to aid him are impossible to get in touch with during the Spring (I think we can guess why).  Mowgli, restless as he is, decides to start running.  He runs practically the whole breadth of the jungle until he ends up at a man-village where he runs into the woman who had taken him in at the other village.  Things are of course different now.  Mowgli has grown into what the woman herself describes as a "Forest God".  The woman herself is old, her husband is dead, but she has another son now.  Mowgli, ultimately ends up deciding to "return to man".  Akela the Wolf, as he died in a previous story had said that eventually he would have to.  I'm assuming that Akela knew that Mowgli would someday need to seek human companionship for various reasons once he was an adult.  But he goes back to the jungle and says goodbye to his animal friends who are still around, his four wolf brothers, Kaa, Baloo and Bagheera.  Mowgli's trip back to mankind was more of a circuitous one.

So he does go back.  That's not necessarily the end of the story, though.

Years before Kipling had even wrote The Jungle Book for children, he had written a story for adults featuring Mowgli entitled "In the Rukh".  In this story, a man from the Indian Forest Service meets Mowgli and a series of events happens that includes Mowgli taking a bride and living with her in the wilderness.  This suggests that Mowgli does acclimate to people but ultimately never loses his wildness.  And the story, despite being for a different demographic, does seem to be canon with the other stories.  Kipling references it at the end of "Tiger!  Tiger!"  Give it a read.  It's not bad. 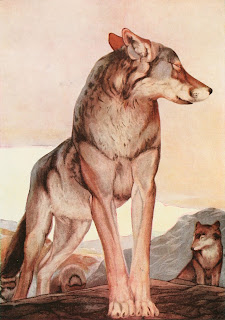 Well, I didn't review it because I try to keep Fairy Tale Media Fix oriented on movies and TV shows based on true fairy tales and folklore.  Besides, I don't want this blog to be nothing but Disney reviews.

But I did like it.  I liked how they kept the basic bones of the Disney animated film, but focused the story more on Mowgli and his growth.  While the original Disney movie was about what the animals were going to do about Mowgli, the live action film was about Mowgli himself.  There were also some really nice bits taken from the books that weren't in the animated film like the Water Truce and the creation story about how the elephants created the Jungle.  As for Mowgli returning to the man-village and dealing with all that stuff, I just don't think the Mowgli in the movie is to that point yet.  But you know, a sequel is supposed to be in the works.
Posted by Adam Hoffman at 4:24 PM