So, I’ve touched on a number of things that fall under the banner of “fairy tale” in the grand soup that is American pop culture (even though some of them technically aren’t fairy tales).  I’ve talked about folk tales, children’s literature and legends.  However, there is another thing that gets the fairy tale label.  It’s something that is so simple that you could almost forget about it or write it off, but it’s almost always there.  It is the nursery rhyme.  Nearly every mash-up of fairy tale material includes at least one.  But why?  Why is Little Boy Blue such a big player in Fables?  Why is there a character named Humphrey Dumpty on the Ever After High web toons?  Why does Little Bo Peep show up in both Once Upon a Time and The 10th Kingdom?  What are these rhymes?  Where did they come from?  And why do they stick with us? 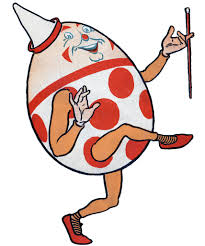 Near as I can tell from some rudimentary research, while they are a form of folklore, most nursery rhymes have only existed since about the 18th century at the earliest.  Also, while many rhymes are easy to remember and pass along by word of mouth, books of nursery rhymes have existed since the publication of Tommy Thumb’s Song Book in 1744.  There seem to be a few different types of nursery rhymes.  There are lullabies, riddles, learning rhymes and then just rhymes that don’t fit into any of the previous categories.  Interestingly, it seems that those last ones are the ones that most intrigue scholars just because of how people want to know where they came from and what they were used for. 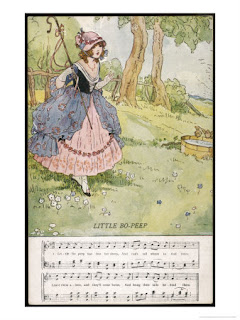 Though it’s possible these rhymes were just developed for entertainment purposes, scholars have theorized for years that certain popular nursery rhymes were actually veiled references to historical events and people.  A lot of this can be traced back to a book from 1930 by Katherine Elwes titled The Real Personages of Mother Goose.  The argument is that the rhymes existed as ways to ridicule, criticize or protest the British crown or other public officials in secret so as not to get accused of treason.  The thing is that a lot of this seems speculative at best.  Every source I look at doesn’t provide any proof or point to any supporting sources.  Also, theories seem to contradict each other.  One theory claims that “Mary, Mary Quite Contrary” is about Queen Mary I of England and her tendency to torture and execute her enemies.  Meanwhile, another source claims it was about Mary, Queen of Scots and her more frivolous tendencies.  One source claims that “Humpty Dumpty” started out as a riddle with the answer being “an egg” while another claims that the original “Humpty Dumpty” was a cannon that fell from the wall of an English fort during the English Civil War and couldn’t be retrieved.  I’m kind of afraid to ask what “Hey Diddle Diddle” might be about.  Interestingly, the Walt Disney company once made a cartoon based around these theories. 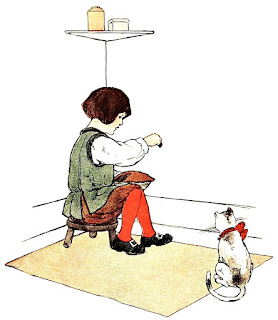 This gets at the question of where they come from, but it doesn’t answer the other questions.  However, I suppose we can attempt to answer them with a little bit of common sense.  The reason that these rhymes probably stick with us is because they’re such a big part of our childhoods.  Lots of developmental psychologists and doctors (as well as the occasional parenting blogger) have talked about how nursery rhymes help small children develop language and spatial skills.  Also, the rhyme schemes and rhythm of the rhymes makes them easy to remember.  As for why  every fairy tale mash-up uses them, a large part of it stems from the fact that “fairy tale” is usually translated to “Really old public domain stuff we remember from childhood” as I referenced at the beginning of this post.  However, there is something else that has come to mind that makes nursery rhyme characters really handy to use for these kinds of projects.

No, really.  Fairy tales from the folk tradition usually have characters that don’t have names.  They’re defined by things like profession, age and gender.  When they do have names they’re usually just very common names (like Jack or Hans) or they’re names that are boiled down descriptions (like Snow White or Bluebeard).  This is because fairy tales are almost pure plot with basic character types to carry out the roles.  Nursery rhymes, on the other hand, hinge on rhythm and rhyme scheme.  So, they usually have names that fit those rhyme schemes.  Often times they’re descriptive as well, but they are also memorable.  They’re names like Humpty Dumpty, Little Bo Peep, Jack Horner, Jack Spratt and Solomon Grundy (the latter is not to be confused with the DC Comics super-villain that was named after him).  Using them is probably a lot easier than using a character that’s just identified as “the youth” or “the woodcutter” for an entire story.  On top of this, many of these characters also have notable images that have stuck with us from picture books of years past.  These are images that are generally not trademarked by anyone anymore.  Humpty Dumpty tends to look like a gigantic egg.  Little Bo Peep is dressed like a traditional shepherdess.  Little Boy Blue is dressed all in blue and carrying a horn.  You get the picture.  Basically, most “fractured fairy tales” or “fairy tale mash-ups” hinge on the audience’s previous familiarity with the characters and source material.  In some ways, nursery rhymes have that familiarity in ways that fairy tales often don’t. 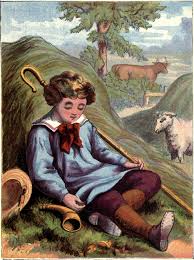 I’m just skimming the surface here.  For a collection of these rhymes, a good place to start would be right HERE.  I know there’s more that probably could be said about a form of folklore that has such staying power.  Maybe I’ll revisit this topic again in the future.  We’ll see.
Posted by Adam Hoffman at 11:55 AM